No such thing as a 'free' breakfast

When it comes to gratuities availed to those travelling First Class aboard train services in Britain, m'colleague and I can happily say we're 'up there' with the likes of Barry Doe. Or at least we used to be. Time was when First Class passengers were guaranteed to receive at least some morsel of food - from a three-course meal with chocolates and unlimited alcohol to a cookie or piece of fruit - but in researching today's blog entry, the recession has been biting for some train operators. 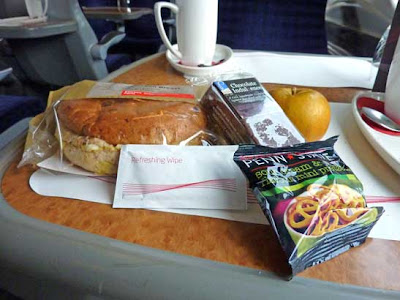 Elevenses aboard First Class Virgin Trains (a Coronation Chargrilled Chicken roll, chocolate cake, mini Pretzels, fruit and a hot drink or any item from the drinks trolley)
Essentially, Virgin Trains is the only TOC who now offers a full, free dining service aboard its West Coast Trains franchise. There continues to be three different menus on offer throughout the day and last autumn I sampled the Breakfast and Evening Meal variants on my London-Glasgow return trip. Not a single penny did I spend while I munched my way through a full English breakfast on the outward journey, unlimited quaffing of the drinks trolley, baguettes for lunch and pie and mash with a selection of cheese and oatcakes for the evening meal - with a choice of wines. All completely gratis. 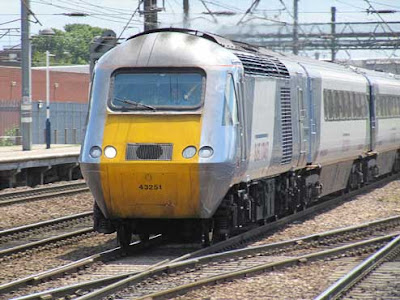 Currently, only tea/coffee, mineral water, fruit and a solitary biscuit are offered for free aboard East Coast services, but could all that be about to change?
Compare this with the other Anglo-Scottish express train franchise - East Coast - and the gaping hole becomes more a chasm. Nothing is free and virtually all dining cars have been removed from all services. This took place under National Express tenure, when anything and everything was being considered to save money. That said, freebies for First Class passengers under GNER tenure was woeful by comparison to Virgin Trains. During our 2005 LEYTR Railrover, we travelled a number of times with GNER and could only receive tea/coffee, mineral water, fruit, biscuits or individually-packed slices of cake for free. It's not quite Highland-reared Beef Bourguignon with all the Fairtrade trimmings and as many G&Ts as you can legally consume! 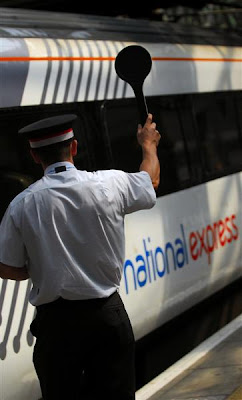 Passengers were not sorry to wave goodbye to National Express East Coast, who removed all but single figures of trains offering a full restaurant service. The limited freebies in First Class remained as limited as ever, too
But, things are to change, or so we're lead to believe, as East Coast - now under the control of the UK government (via the specially set-up parent Directly Operated Railways), with a free breakfast offered to all First Class passengers who boarded their 0800 King's Cross to Edinburgh service last Thursday.

This was, we believe, essentially a 'dry run' for the press launch which will take place tomorrow. Quite what those down the road at Virgin HQ in Euston will think is anyone's guess. First they pinch a Pendolino for 9 months and then they steal their thunder with free food for First Class passengers.

Unlike Virgin, the free food enticement for East Coast passengers won't commence until the Eureka! timetable's introduction from May next year and it could well spell the end of the company's restaurant cars. First Class customers using East Coast must now be wondering how much their fares will increase to pay for the ‘free’ food, unless of course government-run East Coast absorbs the cost and sees it as a passenger benefit, but given the current Spending Review, will this be allowed? 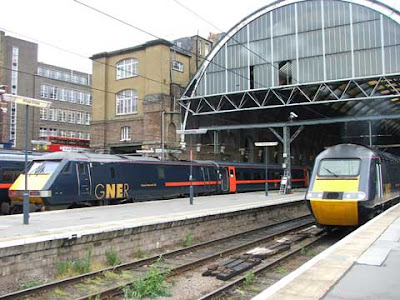 GNER operated a similar number of services will full restaurant service to that offered today by Virgin Trains, except GNER made all its passengers pay for the food.
One certainty is that the increased financial outlay for free breakfasts will come at a cost and the balance sheet will need justifying.

Essentially, Virgin Trains is the only TOC who now offers a full, free dining service

Very true, though we were only detailing franchised TOCs and should have made that more clear.