Just down the road (literally) from the LEYTR exclusive we posted at Chapel St. Leonards yesterday, is the tourist village of Ingoldmells. National Express coaches to/from London call here, too, using the bus station. Holidaymakers may have been astute enough, however, to spot this coach stop flag, also in Ingoldmells: 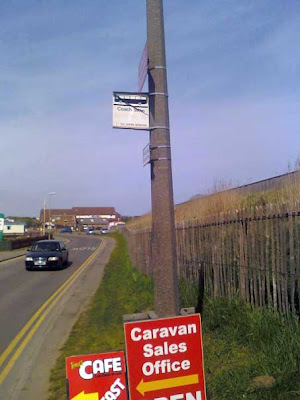 It's been attached to the lamp post in question, at the northerly tip of Roman Bank, since (we believe) 1997. As a trial, the main Mablethorpe-London service called at the holiday camp near the centre of the tourist hot-spot in addition to the bus station (further west). This trial lasted one season and the coach stop has never been taken down. 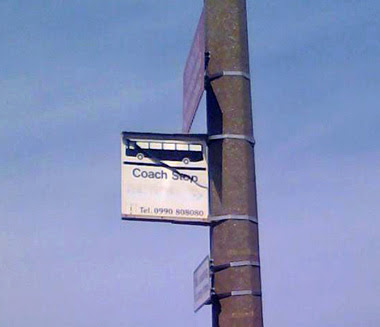 The sun was pointing directly into the camera when an attempt was made to photograph this flag from the other side
While, from this angle, the flag looks worn and faded and the double-N logo barely visible, apparently the shot from the other side is of an almost-pristine logo. We've been told other NX coach flags at Lincolnshire villages, through which coaches no longer operate, also exist. Contributions welcome.

Just to let you know, there is one at Glentham too, on the main road near the pub!