If, like many, you believe the government's Intercity Express Programme (IEP) to be dead-in-the-water, following the VFM review instigated by the Transport Secretary, you'll no doubt have paused to consider what the alternatives could be. We assumed that yet another mid-life refurbishment would be in order for the HST fleet, though were shocked to see train manufacturers clamouring to offer alternatives.

They first entered service on the Great Western Main Line back in 1976 and today the High Speed Train (HST, Class 43) has spread its wings to encompass the East and Midland Main Lines and cross-country routes in between. We understand that while the engines that provide the motive power in the HSTs (the original Valenta engines have been replaced with MTUs (East Coast/Great Western) and VP185s (MML)), the alternators and traction motors are generally originals; the body shells of their Mk3 coaches are also beginning to deteriorate. A decision regarding another, more costly refurb is needed immediately.

With electrification announced for the Great Western Main Line and with the ECML already covered, a new fleet of electric locomotives could be purchase to haul the existing Mk3 coaching stock. Clearly, refurbishment of coaches is less costly than their motive power, and the requirement to purchase just a handful of electric locos to haul these stalwarts would offer a much reduced price tag to that of IEP.

Bombardier and Alstom - two of the top train manufacturers - claim they'd be able to make a bestoke British electric loco to fit the bill. Bombardier claims its range of TRAXX locos would fit the bill, while Alstom offers up its 125mph Prima II. Should the HST Mk3s not be up to scratch, a reduced-cost electric multiple unit could be developed. Both Bombardier and Alstom provide ideas here, too. Alstom say they could easily produce a non-tilting Pendolino and a modified Voyager that receives its power from a pantograph is something Bombardier claim is relatively straighforward. They've even gone so far as to offer ways in which the existing Voyager fleet could be converted to electric traction. 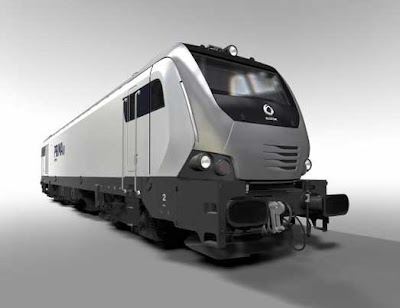 Alstom's Prisma II isn't as prevelent as Bombardier's equivalent, though the company believe it would do the job of hauling rakes of Mk3 coaches under electrified lines 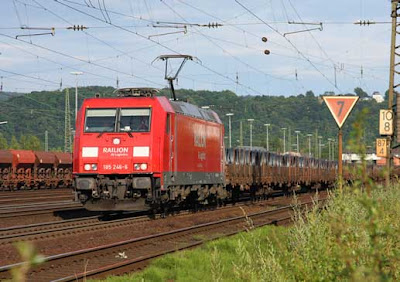 Seen regularly throughout Europe is Bombardier's TRAXX range of electric locomoties. Powered by electric drawn from overhead cables, the TRAXX could haul passenger trains along the soon-to-be-electrified Great Western Main Line and the East Coast Main Line
What about Siemens and Hitachi? The latter cornered the market a number of years ago when it was chosen by the DfT to produce the new Class 395 'Javelins', used on HS1 between London and Kent. Neither Hitachi nor Siemens (who'd been pipped to the post by the Japanese for the production of the '395s') have said what they'd be able to offer.

By contrast, in the bus industry, there is very little scope for bespoke vehicle innovation. How long has TfL been dithering with its 'Borismaster'? How many bus body manufactuers are left who could supply the UK bus market with an innovative stop-gap solution to a parallel problem, should one ever present itself? With the 'Borismaster', there isn't actually any need for a solution; the bendies were working perfectly well - it was political might to please London's voters that resulted in what most outside the Capital believe to be a complete waste of time and money.

There's a lot more money in the rail industry and so more often than not, all the stops are pulled out. Of both industries, I'm happier it's the railway that's facing the important decision of what to do to replace out 30+ year old HSTs. Goodness knows what would happen if it were the bus industry. Some would argue that the privatised bus companies, who are free to commission and purchase what they like, could get it right, while as the rail companies have no say in what trains they're given (nor do they like the DfT spending £8mil p/a on consultants' fees) the one-size-fits-all policy here is the real problem.