Glasgow's unique subterranean circular railway is to see its off-peak service frequency reduced in order to bring down costs and to curb the system's £3.4 million overspend. This would see trains operating during the evenings and on Sundays run at an interval of 12 minutes, rather than the current 8.

Strathclyde Partnership for Transport (SPT) operate the 113-year old network, which one of your editors sampled last autumn, and has come under attack by members of trade union Unite for what it describes as "economics of the madhouse". While they were pouring scorn over the decision to reduce the number of trains per hour from 7 to 5, SPT has, on a broader canvas, been seen in a very unflattering light following some of its top directors' dubious expenses claims, totalling over £100k in a three-year period. The Top Man at SPT, the chairman and his deputy all resigned over the allegations. 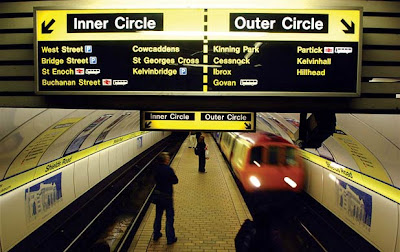 Unlike bus ridership, the Glasgow Subway - referred to as the Clockwork Orange on account of its circular operation and colour scheme - has suffered in the current economic downturn considerably, losing in excess of one million passengers over the past two years. While the bus industry has had casualties of its own, ridership hasn't dropped uncontrollably, primarily due to two-car families having to downsize and the free concessionary travel passes. Those in possession of a Scottish National Concessionary bus pass are charged a flat fee of 40p per journey. The Subway's reach barely extends beyond the city limits, with equivalent journeys above ground being undertaken for free by surface transport.

Commuting, while taking place on the Subway, is not as prolific on the network since it doesn't extend into Glasgow's suburbs, so its off-peak bread-and-butter comprises leisure travellers and those who simply want to get from one side of Scotland's largest city to the other as quickly as possible.

Unite claim SPT is reneging on an agreement brokered five years ago that would see reductions to frequencies and its members' hours only with prior union discussion. They also claim that rather than reduce frequencies, a recession is an excellent opportunity to try and expand the service offered and to attract new patronage through the system's low-cost fares. Reducing daytime evening and Sunday frequencies could have the opposite effect of alienating patronage further.

Glasgow MSP Sandra White believes the manner in which SPT has chosen to simply cut the service frequency when the potential for car usage is at its highest raises deeper questions, the biggest being the Executive's overall ability to operate the Subway. She would like SPT's accountants to be less blinkered when analysing the body's figures.

At least the operating hours of the Subway will remain constant - this being the only positive to be drawn from SPT's press statement. They claim that, following a customer patronage survey, they're simply adapting the Subway's frequency to mirror the peaks and troughs of ridership, which will then maximise the efficiency and ensure its long-term survival. I think we all know when the busiest and quietest periods of a subway's operation are, and in many respects train frequencies therein already mirror this.