"An absolute outrage!" wrote The LEYTR Stig the other day. He was referring to the section of relatively new pedestrian tunnel beneath the streets of King's Cross that appeared devoid of adverts and billboards. He added: "The stretch in question was opened a couple of months ago as part of TfL's redevelopment of the whole King's Cross St. Pancras Underground station. It coincided with the opening of the new ticket hall there and links this with the Piccadilly Line".

Upon making a site visit last week, our Stig reported: "The pedestrian tunnel continues to be devoid of adverts for the time being. I think it looks rather calming and untroubled". He added: "Expect matters to change soon though!"

And to prove his point, he sent us this photo taken 4 days ago: 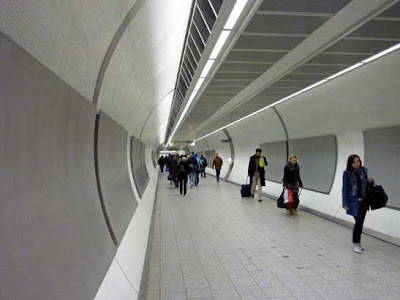 We think what helps the tunnel look 'untroubled' is the additional width and lack of passengers! Who'd have thought that somewhere as prominent as this could have been left advertless for so long, especially in London - unless the large grey boards are art?