We've got a couple of interesting shots from the London Underground. First is one in a favourite vein of ours: easily miss-able spoof signs. 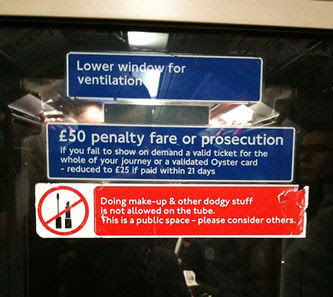 It looks as though an attempt has been made - and then abandoned - to remove the spoof sticker in red.
The second is of a special Underground tunnel devoid of adverts. As many readers will have used the Underground in their time, we're sure you'll appreciate just how different this shot looks compared to the more traditional look, complete with adverts and buskers galore. 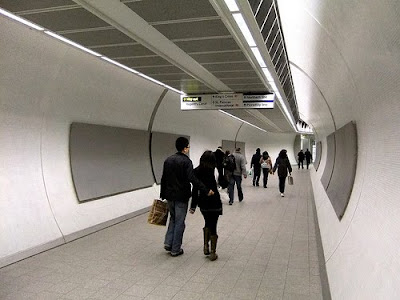 Except we lied! This is a shot from a central London Underground station, taking just before Christmas. It depicts tourists and commuters using the new section at King's Cross St. Pancras. Many of us will look at the above photo and think "how very refreshing". The LEYTR Stig and his compadres will look at the same photo and utter something like "a revenue earning stream is not being realised". We wonder what it looks like today!