The December 2009 National Rail timetable change saw no noticeable improvement to First Capital Connect's (FCC) Thameslink network of services, forming the second occasion improvements have been delayed to the route. The latest delay is, according to FCC, as the result of its workforce refusing to work their days off as overtime.

Currently, around 70% of the planned new timetable is running, with an ASLEF ballot result known on 13 January. The result of this will shed light on the likelihood of additional trains running. Consequently, a FCC spokesman said that until the result of the ballot was known, the company was unable to state a date when the full service would be implemented.

The first delay to the enhanced Thameslink timetable was delayed back in March when train manufacturer Bombardier admitted to missing its deadline with its new Class 377 train orders. Trains were then cascaded from elsewhere, mainly GoVia's London Midland company. 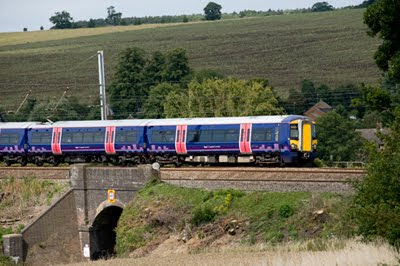 A First-liveried Class 377 used on Thameslink services today.
Network Rail made significant progress over the Christmas period, spending £10 million to remove a 22-metre rail bridge span and replacing it with a new 350-tonne single-track section, as part of its quest to complete the full Thameslink programme in time for the 2015 deadline. Thanks to RAIL the remaining elements of the Thameslink programme are as follows:

2010 - From April Victoria signal control assumes responsibility for the Blackfriars-Farringdon section of route and lines between Kentish Town-Blackfriars will come under the Thameslink name. From late-October Blackfriars station will close for eight weeks.

Easter 2011 - New 'high capacity' signalling conventional signalling works will be commissioned between Kentish Town-Farringdon, increasing the number of signals to one every 200m, enabling up to 20 trains per hour to pass through this section.

November-December 2011 - Signalling between Farringdon-City Thameslink will be commissioned, Bedford station platforms will be completed, the first 12-car trains will begin to operate from the timetable change in December and 16 trains per hour will pass through the core section of London.

2012 - New bays at Blackfriars station will come into use, new signalling will be commissioned between City Thameslink-Loughborough Junction and towards the end of the year, FCC services to/from London Bridge will be diverted to Crystal Palace.

2015 - The December timetable change will see the magical 24 trains per hour through the core London section of Thameslink route, FCC trains recommence serving London Bridge following the station's renovation and the Thameslink programme will be complete.

LEYTR Comment: The Thameslink upgrade is on the minds of far more London commuters than Crossrail, yet is regularly overlooked. FCC's ASLEF union members are being balloted now over a number of issues, their pay being one of them. This is nothing new, with train drivers and guards at many TOCs instigating their luxurious veto to Sunday working in protest at the measly pay offers being made. Any attempt to change their working practices will result in further action, while passengers are being inconvenienced by being forced to travel on replacement buses and now one of the first phases in the multi-million pound Thameslink project - the benefits of which will be felt by thousands of commuters - is being put into jeopardy. The TOCs need to swallow their pride and make realistic demands of their workforce, which also means making realistic pay offers.

Note, added 7 Jan 2009: the ballot by ASLEF members employed by FCC has been suspended, as FCC made a renewed pay deal to its workforce, which equates to 5% over two years. ASLEF and FCC are now working together to agree a suitable date to implement the latest full Thameslink timetable. FCC's initial offer to its employees was a pay freeze this year, followed by a 3% rise next. The company seems to genuinely have 'put its money where its mouth is' and made a better offer.