Portillo and Settle to Carlisle

The BBC is currently airing a new series of programmes that see journeys by train around Great Britain. The programme, Great British Railway Journeys, is shown on weekdays at 6.30pm on BBC2 (and also BBC HD if you're so persuaded) and last night's episode struck a particular chord with me. Former Conservative cabinet member Michael Portillo is the 'celebrity' undertaking the current journeys and he visited the Settle to Carlisle (S-C) line, which was faced with closure in the early-1980s. He's not everyone's cup of tea, but Michael Portillo did a good job presenting this evening's pretty easy-going show.
Portillo's journey is from the North West to Scotland, using the first-ever Bradshaw's Railway Guide, published in 1940. His aim is to traverse the many railways in this section of Britain and compare how different things are in 2009 to 159 years ago when Bradshaw's first Guide was produced. You may consider it a little strange, then, for Portillo to visit the S-C, since this wasn't opened until 1876.

In 1983, word had reached residents, commuters and business leaders in Settle that British Railway (BR) had plans to ask for permission from the government to close the S-C line. They believed that the line had fallen into such a poor state, that repairing it would cost too much. Peter Shaw and Mark Rand were two local residents who started the battle against BR to save the line. BR also claimed that annual passenger numbers had declined to around 300,000 and that virtually all the viaducts and tunnels along the route needed work carrying out. Michael Portillo MP was the Transport Minister at that time, and is the person credited with saving the line from closure.

Portillo claimed he pandered to Margaret Thatcher's desire to retain British history and that this ultimately secured him the funds to save the line, news of which was written in an official letter from the Minister's office on 11 April 1989, when he signed off a letter confirming BR had not been given consent to close the line.

Today, the line - built by the Midland Railway to provide a high-speed north-south line in competition with its rivals - has seen impressive growth, with around 750,000 passengers travelling annually and an increase is trains. Local community plays a massive part in the line's continued success, with many local people volunteering to maintain the small stations along the line - one of which being Dent, the highest station in England, which has seen its station building and adjacent snow hut converted into holiday accommodation.

S-C topography
One of the line's least impressive statistics is the number of people who died during its construction. 6,000 navvies were needed to build the 72 mile route, taking in 14 tunnels and 20 viaducts. In one parish of St. Leonard, near Ribblehead, a total of 201 deaths were recorded between 1870-1875, 110 of which were children. This occurred because of the labour-intensive way the route was built, in particular the viaducts. Shanty towns could be found along the line's route, housing - in very cramped conditions - the navvies and their wives. Disease, particularly Smallpox, and overcrowding was rife, leading to many problems associated with the Thirld World today.

I was staggered to learn that it's nothing for around 40 freight trains to use the S-C line in a 24-hour period. The route is particularly quiet, thought with single-track sections, not as immediately 'freed up' as you'd expect, though I'd imagine it is a train scheduler's dream when compared to the Midland Main Line, which is reputedly full to date. 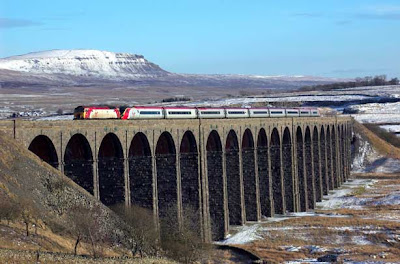 The glorious Ribblehead Viaduct, which is used occasionally as a diversionary route for trains that'd normally run along the West Coast Main Line - seen here is a loco-hauled Virgin Pendolino.
Last month, Merseyrail made the press, annoyed that its request to undertake engineering work on its own network of rail lines was refused, because it falls under Network Rail's (NR) remit and NR's costings for the exact same work was almost double that quoted by Merseyrail. How can the much bigger organisation's price be so much higher, when NR must surely benefit from economies of scale like any virtual monopoly? Things were the same in the early-80s, with BR claiming work to prevent the iconic Ribblehead Viaduct from collapse would be £8 million. One of its enterprising engineers requested permission to look at a small section, and completed a trial repair, which showed that the actual overall cost for the viaduct's repair was £3 million.

This was one aspect which the Friends of the Settle to Carlisle Line had to their advantage when lobbying the government. Talking of the Ribblehead Viaduct, the 24-arched structure took four years to build and was erected in sections of six arches together, which aids the structure's stability. Around 2,000 men were needed to build it, with the highest arch measuring 100 feet.

I'm particularly fascinated with the line as I've not travelled along it since I was a small boy - quite some time ago! It's one stretch of line I'd love to do again sometime and I've no excuse for not doing so since it's hardly cut-off from civilisation, with up to 5 daily departures between Leeds and Carlisle travelling the route.

Portillo said that "My greatest achievement in politics was saving the Settle to Carlisle line from closure" not once but twice during the programme. He also confirmed that he'd been quoted as saying that many years ago. The 30-minute show was very 'feel good' in nature, though not sycophantic and didn't pander to the ego some say Mr Portillo has. It wasn't a 'bow down and thank me that your livelihood is still here and thriving' episode, more a positive look at one small but incredibly important railway line here in Britain. Such programmes with this feel are missing from television right now, in my humble opinion, and most definitely concerning the railways.

A total of 20 programmes have been made and are being shown on weekdays throughout January.

Don't believe everything you hear from Portillo, he's a 'politician' you know, so the truth is rarely in evidence.

The real reason the Settle-Carlisle line was kept open is because Thatcher's closure of the UK's coal mines meant that imported coal would be needed to fuel the coal-fired power stations in Yorkshire, and that meant transporting large quantities of coal from Clydeside, a task which is better done by rail than by road; witness the large number of freight trains hauling coal down the line today.

I have just found a documentary about the Settle-Carlisle on an old VHS - its called "The Fight for the Battle-Carlisle", on BBC2, sometime in the 80s. If anyone wants a HQ rip of this, let me know.