The BBC described the soon-to-open Cambridgeshire Guided Busway as 'ill-fated'. It's certainly had problems, its opening marred by three delays through incidents generally regarding unforeseen flooding and mis-judging the time taken to physically convert the former rail line. 'Poorly planned' would be a better description since ill-fated implies problems out of the planners' hands ensued.

What was clearly within planners' control was the white-lining of the Busway. The following picture had over a quarter of a million hits last week and we thought we'd add a few more hundred to that by reproducing it. 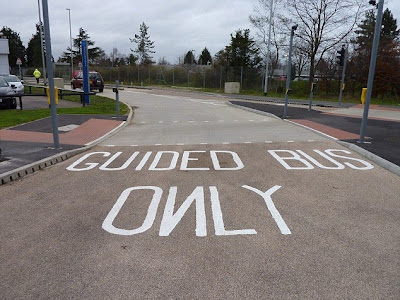 A friend wondered what type of 'primitive being' local authorities employ to mark lines and letters on the highways after the above gaffe. Was he (or she - can't be sexist!) Russian? We assume that the back-to-front letter N in 'ONLY' wasn't spotted when the contractor left the site and that it only came to light after a (not very) eagle-eyed passer-by spotted the faux pas.

Not everyone's enamoured with the £116 million Busway - the world's longest - when it finally opens (completion has been delayed once more into early-2010). Opponents feel the guided busway will only offer limited assistance to journey times since in the centre of Cambridge buses will have to vie for roadspace along the congested streets with all other road users; others feel that the money spent on the Busway would have been better used to re-introduce train services - borne out by the cost for this option being a fair amount cheaper than the cost of the Busway.

Two online comments that made me smile regarding the above spelling mistake are:

"Dylseixa Rlues OK" and
"Even with the 'N' corrected, the word 'Mis-' is still missing from the signage" (GWB)