Over the coming week, we'll be reviewing our favourite posts and other associated items of 2009. The views will represent the LEYTR Editors and our contributing writers. Contact the editorial address if you have a particular favourite for us to review.

The first deals with our Most Annoying Sign of '09 and the award goes to Nottingham City Council for this disaster: 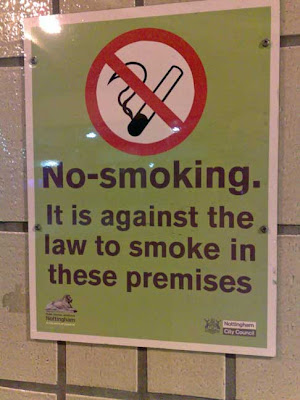 It was taken while I was travelling through Nottingham in the small hours on 20 April this year, and was spotted stuck to numerous walls in the city's Broadmarsh bus and coach station. I'm assuming you've identified the unforgivable faux pas being the hyphen separating 'no' and 'smoking'. I've not seen such a fundamental error committed by a supposedly squeaky-clean local authority during the year.

Of the millions of No Smoking signs displayed everywhere up and down the country, this has been the only one spotted with a hypen. Perhaps Notts City Council know something we don't? (GL)