News broke yesterday afternoon that the Unite union's planned strike by its British Airways (BA) cabin crew for 12 days over the Christmas period must not go ahead as the ballot that determined action to be taken was held illegally.

In the High Court ruling, BA was given some much-needed breathing space owing to its obfuscation during balloting. Around 800 members of cabin crew left last month, taking voluntary redundancy, yet these people were still balloted. Unite claim that they had to ballot everyone because BA would not inform them which of their members were definitely leaving the company. The High Court's ruling was simple: the ballot is illegal as vote-casters who were knowingly to leave BA's employment before the result was known (and action, if any, was taken) were allowed to vote.

Unite disappointed me: their initial reaction was that the law was "all wrong". We've had well in excess of decade of a Labour government - plenty of time to lobby those to the right of the House of Commons Speaker about an amendment to the law. This hasn't happened. What has surely resulted is an increased vigour to strike by BA cabin crew following a second, legal ballot to take place in January. Christmas travellers have been spared, but I wouldn't book a BA flight at the start of February if I were you!

I'll admit to being astounded at the average annual pay BA's cabin crew receive - £34,000, inclusive of around £16k in allowances. Compare this to Virgin Atlantic's cabin crew who earn an average of £24k p/a, inclusive of around £8k in allowances, and you'll agree there's quite a contrast. BA will rightly point out the higher pay for its cabin crew is such to attract and retain the best in the business. To those recently made redundant, employees quibbling about a two-year pay freeze when they earn more than a school teacher, won't wash. You can be assured of a deluge of applicants when the 'green shoots of recovery' are in full growth and cabin crew vacancies at BA become available. 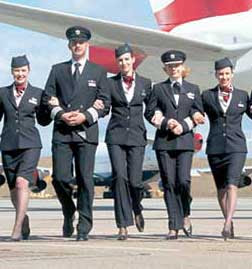 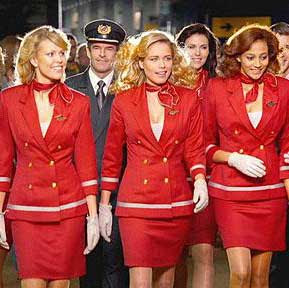 (l-r) BA crew £34k, Virgin Atlantic crew £24k
It's the old, old story: when times are good, private companies are too busy making profits and satisfying shareholders to reward their workforce as much as they'd like, and when times are tough they undertake damage limitation exercises to appease shareholders at the cost of their workforce. Unite's membership employed by BA has a credible claim so far as this is concerned, but when your employer's pension deficit is greater than the company's worth, and that this is just one serious shortfall being faced, is a two-year pay freeze really that bad? (CW)