In the latest CBW, news was carried of a recent public inquiry held by the Scottish Transport Commissioner (TC) Joan Aitken, at which Stagecoach's Strathtay Scottish Omnibuses subsidiary was called to answer questions over its performance.

What made the case unique is that Stagecoach Strathtay was seemingly brought to book following continued complaints by one passenger, and one passenger alone. Identified only as Ms C, the complainant contacted Stagecoach Strathtay on a 'significant' number of occasions by email during 2007/8 to complain about the operation of one service in particular. Scottish TC Joan Aitken described Ms C's correspondence with Stagecoach as 'cordial and balanced'; indeed from the quotes made it would appear to have been the case - with Ms C even apologising about having to contact the company. 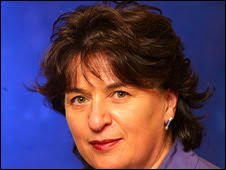 Joan Aitken, Scottish Traffic Commissioner: "I will not disregard individual experience".
Ms C emailed to complain about the punctuality of the Service 77 group of routes on 27 occasions between February 2007-August 2008. The inference in the TC's report is that as a result of this, her compliance officers were sent to Tayside to scrutinise the validity of Ms C's complaints. The Service 77 group of routes (Kingoodie-Dundee-Balmerino) were checked, so too were Services 13/13A, 34, 39A, 73/73A, 74 & 85, with over 200 services monitored over a 9-day period. From the result, the TC suggested Stagecoach Strathtay had only been 'about 90% compliant'.

The 'window of compliance' is for 95% of timetabled bus journeys to operate within a 6-minute window: up to 1 minute early and 5 minutes late; thus Stagecoach Strathtay's non-compliance reached 5%. Under TC's Section 39 powers, a fine of between £50-£150 can be awarded per O Licence. The TC thusly fined Stagecoach Strathtay £140 per O Licence (160), totalling £22,400.

Most unusually, though, was the TC's direct and continued reference to the complaints Stagecoach had received from Ms C:

"I will not disregard Ms C's experience," said Ms Aitken, "even though it could only represent a tiny amount of the operator's overall service in the area. That I do not disregard it is because I will not disregard individual experience. First of all, it is real experience and a real live example of the intended traveller going for the bus and being let down. The operator has a legal duty to operate and run to time and route, and any failure to satisfy that intended passenger, without reasonable excuse, is a matter for me."
Ms C's emails were undeniably the catalyst for Stagecoach Strathtay receiving a fine equivalent to that of a driver's annual wage. You could argue that little could be learned if such a proportionately small fine is awarded, or that irrespective of the amount fined, having your dirty linen aired in public is punishment enough. In Stagecoach Strathtay's defence, the TC did acknowledge that temporary roadworks in the area, to some extent, did adversely affect punctuality while her compliance officers were monitoring, but this did not account for the unacceptable level of early-running.

This is a good example of how one passenger can force a multi-national bus company to face the most senior figure in the transport regulation industry. The power of one had genuine and far-reaching results. You'll note that Ms C first contacted the bus company in question and continued to do so for around eighteen months; she did not go straight to the TC. Undoubtedly, this sensible course of action was respected by Ms Aitken. (GL)