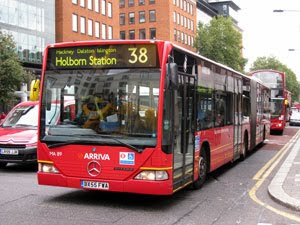 Saturday saw London's most frequent bus route change, with the articulated Mercedes-Benz Citaros being replaced by rigid double-deckers. The 38 operates between Victoria and Clapton Pond to a frequency that provided a bus every 4 minutes at peak periods - a feat not beaten by any other London bus service.

The conversion of London's articulated 'bendy buses' to standard 'decker operation was a pledge made by London Mayor Boris Johnson during his election campaign. It was seen as a 'get rid of the Bendies at any cost as they're not popular with Londoners and it will win be votes' manifesto pledge, and now in office, Johnson feels he has to go through with it - even though we understand he is believed to be less hostile towards bendy buses now he's no longer in 'opposition'.

So much so, that we were told by a well-known industry source at the North Weald bus rally in July that plans are being drawn-up to retain 'at least one' route operated by bendy buses.

Service 38 saw its Bendies removed following service on Friday, with a new timetable introduced from Saturday 14 November. To aid punctuality and make better use of the incoming 'deckers, only alternate journeys during the main period of daytime operation will operate the full length of the erstwhile route; between 0734-2006 ex Victoria, every-other journey will terminate at Hackney Central station, rather than continue to Clapton Pond. TfL claim this reflects the passenger flows to/from Clapton Pond. It also saves them 4 'deckers from their original figure.

The headline frequency has doubled from that of a bus every 4 minutes to one every 2 mins during the rush hours, though the operational timetable we were sent shows that in fact buses depart Hackney Central station at ONE MINUTE intervals from 0659-0713 on weekdays. Service 38 had a peak vehicle requirement (PVR) of 47 bendy buses, though this has shot up to 68 rigid 'deckers (52 x DB300/Wrightbus Eclipse Geminis and 16 x ADL Trident 2/Enviro 400). There is no bus route anywhere in the UK that requires 68 vehicles out at any one time to operate its timetable. The initial PVR for the 'deckers was 72, though turning alternate daytime journeys at Hackney Central station has save 4.

The service continues to be operated by Arriva London's Clapton depot, that currently houses a total of 109 vehicles (Services 242 & 393 are also operated from here, along with Service 38's through-the-night sister service: N38).

To put into some perspective the mammoth operational task of Service 38, during Mon-Fri daytimes, buses depart Hackney Central station (Graham Road) at the following times past each hour, heading towards Victoria:

The Mayor's bendy bus removal policy commenced in July, when the two former Red Arrow-branded routes (507/521) saw their articulated Mercedes-Benz Citaros replaced by identical - but rigid - examples. The 'softener' here was the introduction of a new Saturday service on Service 507. 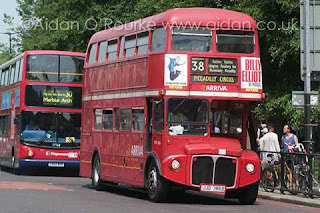 There are many people opposed to replacing bendy buses with their rigid counterparts, and the cost involved in the conversion is something frequently mentioned: £13m per year, every year until the last route is converted - totalling £60 million is one figure recently quoted by the BBC, though we thought it was a little less. The rigid replacements need to operate more frequently as they have fewer seats/room for standees, so greater numbers are in operation (47 bendies -v- 68 'deckers), which directly affects congestion and pollution. Other factors include the ability for passengers to board through any door of the rigid single-deck Mercs operating Services 507/521 - failing to address Londoners' concerns about those choosing to ride for free.
Remaining bendy bus routes & their contract expiry dates:

Some contracts were expected to require negotiation during 2009, though have been extended to 2011 as a result of good performance. The list shows an approximation for when each remaining bendy bus route will be converted back to rigid. Services 436/453 are not expected to be converted during Boris Johnson's first term - will he have to potentially leave office with bendy buses continuing to operate on London's streets, after all the fuss he made? (GL)