Almost two years ago, m'colleague and I visited the East Coast Main Line (ECML) and took some last-ever photos of trains in the livery of the then East Coast franchise operator, GNER. Days later, and the GNER livery would be faded out and the vinyls that depicted the grand gold-lettered company name would be replaced with all-lower-case 'national express'.

Little did we know at the time that two years later, we'd be back at the same bridge overlooking the same stretch of line, eager to capture some similar shots of yet another East Coast franchise operator about to be 'gone for good'! 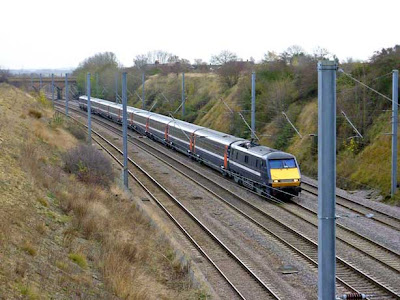 Yesterday's shot, taken from Bridge 202 at Essendine, Rutland: a Class 91 heads at near-top speed along the Down Main at approximately 1430hrs. The white stripe along the train was added under NXEC tenure, though on this train, the red GNER doors remain; others have seen the doors painted dark-blue.
For just over a mile, the ECML passes through the picturesque unitary authority of Rutland, and two bridges cross the line here. One is the main A6121 through the village of Essendine, the other is a quarter of a mile north, along the Pickworth Road, known only as 'Bridge 202, Essendine', and leads from the minor road to a farm. From here, a reasonable vantage is gained over passing trains through Rutland. 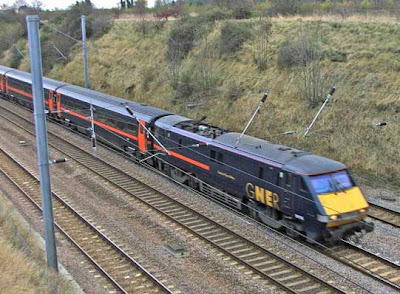 Same bridge, same view, same train, different operator. Stand here tomorrow and a third operator will be operating this Class 91! GNER agreed to NXEC removing its name up to a week before the December 2007 handover, though this didn't seem to be the case with East Coast Railway and NXEC, from the hour or so we were loitering in Essendine.
For those who may have just 'surfed on in' to this blog and today's entry, we've been following the fate of the East Coast franchise for quite some time. At 2359hrs today, East Coast Railway, a government-operated company, will assume command for the franchise, relieving National Express East Coast after almost two years' operation. Franchise handovers generally take place at 0200hrs, so the 2359hrs for the East Coast seems odd, though many would agree the date - Friday the thirteenth - is synonymous with the route's bad luck of recent years.

Our NXEC/GNER archive is listed below for your convenience:

6 Feb 2008 - King's Cross NXEC departures. NXEC announce they plan to remove departures from screens at KX up to 10 mins before departure. A sign of things to come methinks....

23 Feb 2009 - A curt response. NXEC rebuke Richard Branson's offer to relieve them of their franchise.

17 Mar 2009 - They just don't get it, do they? NXEC deny plans to bar photographers from its stations.

1 Jul 2009 - But what about Lincoln? NEG officially hands back NXEC.