At 0449 last Tuesday (17 November), two East Midlands Trains (EMT) Class 43 HSTs collided while performing shunting manoeuvres at the Neville Hill depot in Leeds. The Leeds-York line was particularly affected and a total of 5 train operating companies had to either re-route their trains in that area or provide replacement bus services. 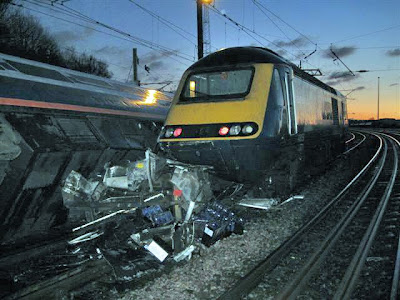 CrossCountry's services between Leeds and York saw some diverted via Castleford during the morning of the 17th; new East Coast Railway saw a limited service on its entire network, with buses connecting Selby and Hull to the ECML at Doncaster; EMT services saw delays generally of around half-an-hour; and First TransPennine Express saw its Leeds-York trains diverted via Normanton with a knock-on effect of 30mins. 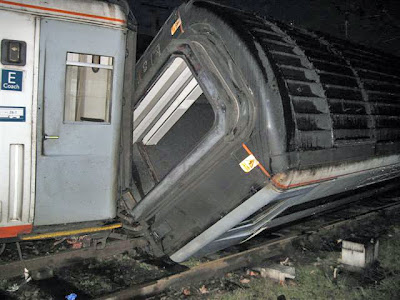 The operator affected the most, however, was Northern Rail, who replaced buses with trains between Leeds-Selby; all Leeds-York services; and from 0909hrs all York-Leeds services (the line had to be closed mid-morning to remove the derailed and horizontal Mk3 carriages from the tracks. 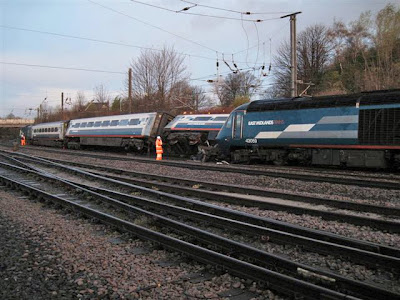 The accident took place at the depot's western exit with one HST set not having cleared a set of points before a second set took the road and the collision - albeit at a relative slow speed - took place. EMT were keen to point out that no one was injured as a result of the collision - one that looks like human error. While the accident itself didn't take place on the main line, the effort to re-rail the stricken train caused the passenger service disruption as this necessitated use of the adjacent main line. 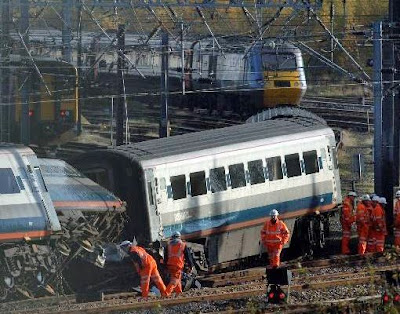 'Minor' collisions are fairly rare, though Virgin had one on 29 March, rendering two of its Class 390 Pendolinos out of service after they collided at their Wembley depot. EMT, like Virgin, are now two sets down. EMT's managing director Tim Shoveller only last week spoke about how his company is short of the number of trains it ideally needs to operate its franchise. At the time, his shortfall didn't include Class 43 HSTs, though they may have temporarily been added to his list. 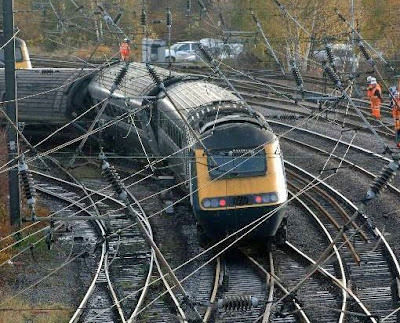 NickTheBatMan has a short video, taken from a passing train, that show the extent of the damage. Click here to view it. (GL)