Beneath the streets of London

Over the past week or so, we've had a fairly strong London theme to the blog. It wasn't deliberate, it's just where all the newsworthy stories that have caught our eye seem to have emanated. Two more for you now, before we bid farewell to 'that there shiny London' and return to news items of a more provincial manner in future posts.

First is the new ad campaign furniture company DFS has initiated on Tube station walls. They've gone through their Tube map and tried to identify station names they can use in an advert for their store. Clever enough. However, not everyone is enamoured by DFS and on Charlie Gilbert's flikr stream, the first of what is likely to be a stream of witty ripostes has been produced. See what you think: 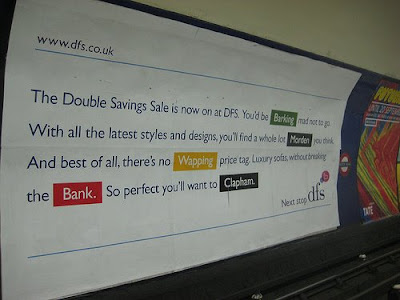 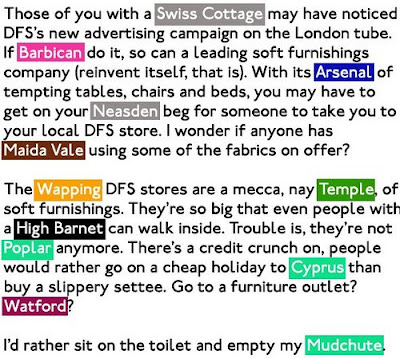 Perhaps one of the most useful maps a Londoner could ever purchase has recently been made into an iPhone application - the Way Out Map. The premise is simple and bases its whole reason for being on the principle that everyone who uses London's Underground system hates to be there and wants to surface as soon as possible. This much larger than the standard Tube map informs users in which carriage to travel to be nearest the exit at all stations.

It's a staggeringly simple idea and one that I found so 'blue sky' that two years ago I bought myself a copy for £1.95 (tagged onto another order from Amazon to avoid the p+p charge). Trouble is though, the past few times I've been to London, I've left the bloody thing at home!

One final subway-related matter: The Taking of Pelham 123 was released at cinemas from the end of last month. It's a remake of a 1974 movie by the same name. To date, the film should really have been re-named The Taking of Pelham 1323, but the producers wanted to sell it on the back of its predecessor, starring Walter Matthau and Robert Shaw. The 2009 version appears to have a more dramatic conclusion and is more ethnically diverse. It's something we're looking forward to going to see. The original is heartily recommended and can be purchased for £2.99 online. We'd urge you to watch the original first before visiting the flicks.