Returning from the North Weald bus rally on 5 July (coincidentally the same date our modem died!), we called in at the Go Whippet depot, just off the A14 near Fenstanton in Cambs. Under the agreement it struck with Stagecoach Cambridgeshire, the company needed to clear its site by Saturday 11 July, as Stagecoach moved in the following day. Luckily, a near-full compliment of Whippet vehicles was still in attendance, with a fair number in the locked workshop, when we called by. The vehicles all bore the company’s new Swavesey address in readiness for the move. 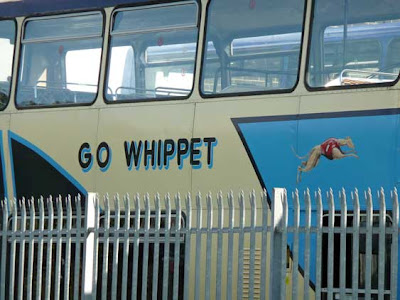 Stagecoach’s Huntingdon depot closed a month before they were able to move into Whippet’s premises, the interim period seeing the undertaking move to what was effectively a large lock-up near St. Ives. That said, the new ethanol vehicles to be used on the forthcoming Cambridgeshire Guided Busway, have been making daily trips to Whippet's yard for the special organic-based diesel contained in tanks delivered to the depot from new.

Stagecoach purchased Cavalier Contracts Ltd at the start of April 2008 and with this acquisition came the Huntingdon & District (H&D) subsidiary, ironically, a company Stagecoach had owned until 1995 when it was forced to divest this and MK Metro in Milton Keynes to be able to retain its recently-purchased Cambus (and it's Peterborough-based Viscount Bus & Coach subsiditary). Cavalier had agreed to sell its H&D depot in Huntingdon prior to selling to Stagecoach and so the hunt has been on for the past year for new premises.

To view all photos taken on 5 July with a near-full compliment of Whippet vehicles in what is now the new Stagecoach in Huntingdon depot, click here. (GL)