The first bendy to go

Today sees the first day's rigid-bus operation on London's Red Arrow Service 507, between Victoria and Waterloo central rail termini. Last Friday, therefore, saw the final day of bendy bus operation on the route. The fete of London's articulated Mercedes-Benz Citaros was sealed by incoming Mayor, Boris Johnson, who pledged to banish the vehicles from the capital's streets as part of his manifesto. More recently he's announced that all bendy buses will have been eradicated by the end of 2011.

Said Boris on Friday: "These writhing whales of the road have swung their hefty rear ends round our corners for the final time. Pedestrians that leap, cyclists that skidded and drivers that dodged from the path of the 507 will breathe easier this weekend. Bendy buses on other routes are on borrowed time and I can confirm they will all have gone by 2011. Engineers will now scrape all traces of the capital from these first nine buses and next week they will be sent back to their spiritual home, an airfield in the Midlands." 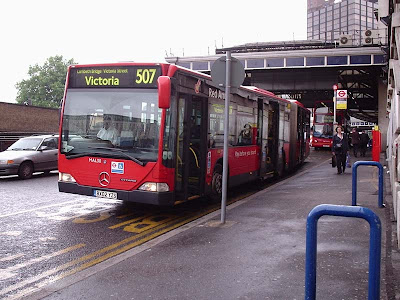 Coming soon to an airfield near you in the Midlands: this articulated bus (and 8 others like it). It's a serious point though - where else in the UK are there operations that require large numbers of bendy buses that could be recipients of the Mayor's mass-cull?
It's ironic that the Red Arrow network was the first to be converted to articulated bus operation in June 2002. Replacing the 9 bendies on Service 507 are 15 brand new, 12m single deck buses, even more ironically, rigid versions of the Mercedes-Benz Citaro. We understand that they will feature limited seating - similar to the new Class 378s now deployed on the London Overground rail network (112 seats in three cars but with standing room for 500) - with greater emphasis for standees. Open boarding through both doors will continue as with the bendy buses, to reduce dwell times as much as possible.

For the first time, weekend operation of Service 507 took place yesterday and Saturday and the weekday frequency has been increased from a bus every 5 minutes (12 per hour) to one every 3.5 minutes (18 per hour).

The additional vehicles on London's streets will only add to congestion in the central area and will only pollute the atmosphere more with the additional 6 vehicles allocated to the route. The cost involved in replacing articulated buses with rigid versions was released by Transport for London (TfL) a couple of months ago - £3 million *per year*. Outgoing Mayor Ken Livingstone vehemently defended the bendy buses on BBC's Question Time in the weeks before the Mayoral Elections in London, stating categorically that no more of this vehicle type has been involved in accidents with cyclists, cars or pedestrians than any other type of bus.

This was echoed on Friday by London Travelwatch chair Sharon Grant, who said: "We have yet to hear a credible reason for scrapping bendy buses, and we are unaware of any evidence that supports it. We do not believe it represents value for money for London’s travelling public, especially at a time when TfL is short of funds. We are still concerned about capacity on the replacement buses, as well as load and dwell times at stops. We will also be keeping a close eye on the potential congestion caused by the extra buses on roads and at bus stops."

Chatting to a well-placed industry source at the North Weald bus rally at the start of the month, he told us that plans are now being drawn-up to retain bendy-bus operation on two services in London, one route being the 436 (Paddington-Lewisham). It could be argued that now in office, Boris has seen just how ill-informed he's been about the supposed horror on the streets that are the bendy buses, but has got himself in so deep he has no option other than to progress with their removal. (GL)