Back to the Future

I made an observation yesterday as I walked through Cleethorpes' central business district. One bus service has reverted to near-identical operation in every aspect from a decade ago. Actually, almost 11 years ago.

For it was during September 1998 that the relatively new unitary authority of North-East Lincolnshire received its first low-floor bus service in the shape of a re-vampted Service 12, operated by Stagecoach Grimsby-Cleethorpes. In actual fact, Alexander had delivered the three, new ALX200s on the Dennis Dart SLF chassis early and full service commenced to the old timetable over a month early!

Service 12 was minibus-operated, linking the small commuter village of New Waltham, to the south of Grimsby, with Cleethorpes and out to the much larger, ever-growing village of Laceby. Within Cleethorpes, Service 12 operated a circuitous route, passing many group dwellings and sheltered accommodation for the elderly, and was the lifeline for many people. Back then, N-reg Mercedes-Benz 709D minibuses operated the service. 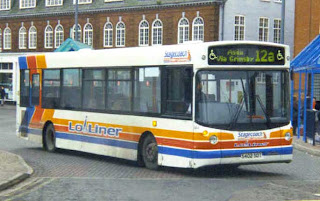 Being replaced by brand-new S-reg Dennis Dart SLFs was a much welcome and common-sense solution. The three new vehicles, 401-3 (S401-SDT), now numbered 33804-6 and allocated to Stagecoach's Hull depot, were very well-received and made a fair amount of special guest appearances in the local press at the time.

Service 12's route had ostensibly remained the same, though at the western end of the route, an extension to the much smaller villages of Irby-upon-Humber and Aylesby had taken place, at the request of the local authority. These villages had a two-hourly service, with the main hourly route bifurcating at Laceby Crossroads to serve each on alternate basis.

There was a steady decline in the operation of Service 12 during the early part of the 'naughties'. The biggest blow was the removal of the dedicated trio of low-floor vehicles to Hull by 2002. As we understand it, despite the money Stagecoach received from North-East Lincolnshire Council, the service still ran at a loss (NELC subsidised certain sections rather than the entire route or entire journeys). A route reverting back to three-step entry is only going to compound profitability issues further.

Consequently, it was in 2007 - with the Aylesby and Irby extensions having long since been removed - that Service 12 merged with the flagship Service X1 linking Grimsby with Hull. Service X1 reputedly made a loss as a direct result of the Humber Bridge toll charge each crossing incurred, and when victory came Stagecoach's way (after a long, public battle, which saw the possibility of the service be withdrawn without replacement) - in the form of toll reductions for stage-carriage services - they went all out and threw to alleged loss-making services together to see what happened.

Gary Nolan, managing director of Stagecoach East Midlands, said in the trade press that such was the upsurge in patronage with this new X1 conglomerate route that better vehicles were being sought (ex Hull Volvo B10M/Plaxton Paladins - yes, they are Plaxton Paladins were being used, overheating regularly). It seems that the new X1 was being exposed to far more of North-East Lincolnshire's population - thanks to the erstwhile Service 12's meandering route - and people were making use of this very handy link from the back-streets of Cleethorpes to Hull city centre.

However, due to EC Drivers' Hours regulations, Service X1 was split on 20 April. Service 12 was resurrected, though only a shadow of its former self if the truth be known, and the X1's route in Cleethorpes forwent the densely-populated 'wiggle' it had hitherto operated in favour of one concentrated more on the seasonal tourist market (i.e. along Cleethorpes' seafront, terminating at the Pleasure Island theme park). Service X1 has been re-named Humber Flyer in a Trent Barton-esque move and registered in two sections with "guaranteed connections" (same bus, same driver) at Humberside Airport.

As for Service 12, and the raison d'être for today's entry, this follows a virtually identical route to that it did back in 1998 and, ironically, it is allocated two low-floor Dennis Dart SLFs with Alexander ALX200 bodywork. These buses were new to Western's AA Buses subsidiary in November 1997 - 9 months before the groundbreaking low-floor buses for Service 12 entered service in North-East Lincolnshire.

Having moved to Grimsby depot from Mansfield, and their bright-pink Pronto livery replaced with the more respectable Stagecoach swirls, 33765/6 (R465/6 LSO) are now regular performers on the new route. The present Service 12 timetable is hourly frequency between 0900-1400, after which there's a curious gap (presumably for operational reasons) of 90 minutes. West of Grimsby, the route is different to that of 1998, now operating via the Grange and terminating at the Bradley Park estate. Between New Waltham, Cleethorpes and Grimsby, the route offers a very poor attempt to convey commuters, with an 0803 arrival into Grimsby bus station and then nothing until 0940. Back in the day, arrivals were from 0835 and hourly to 1735 (this journey departed at 1740).

During 2003, Stagecoach's chief executive and joint founder, Brian Souter, toured the country giving informal talks to his employees. These talks had a theme: Back to the Future. Souter was convinced that, having been forced out of retirement that year as a result of - some would say - a very poor investment through the purchase of Coach USA, the need to take stock, to stand still and to assess each company's local operating area, was needed.

That was back then. In 2009 the theme is very much different, unless of course you live along Service 12's route in which case you could be forgiven for thinking New Labour has just been elected; the president of the US has been a naughty boy with someone called Monika; and a little-known Internet search engine has just come on the scene. (GL)