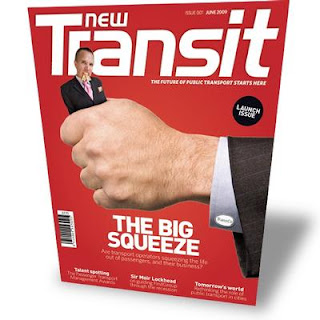 Returning from the LEYTR Top 'n' Tail jaunt yesterday, I found a copy of the launch issue of New Transit awaiting my inspection. It's smaller, it's produced less frequently, it contains no news whatsoever and is now packed with full-page adverts. Perhaps in readiness for the change in format, the price was increased by 21% at the start of the year, too.

On paper, then, if you'll pardon the pun, things weren't looking in New Transit's favour.

New Transit issue 001 contains 74 pages; its predecessor contained anything between 24 and 28 pages. Therefore the amount printed has more than doubled now New Transit has reduced in frequency from fortnightly. But what exactly has "more than doubled"?

It's certainly not news stories since New Transit is a "different animal" now and chooses to bring its members up-to-date news stories through its exclusive online TransportXtra.com site. Looking at the penultimate [old] Transit, issue 361, published on 1 May 2009, there were 34 news items. This hasn't been "more than doubled" to, say, 75; there are now none. Issue 361 carried 25 adverts, excluding tenders and recruitment; New Transit carries 38 adverts so proportionately the amount of advertising appears to have actually reduced. The adverts that are carried now though generally take up a full page each, giving the appearance that New Transit is now heavily reliant upon advertising revenues.

What has bulked each edition up the most is pretty obvious. It is the inclusion of huge photos within articles; huge pie-charts; huge centre-spread shots of what a Crossrail building site looks like and a contents page that is more than double the size it used to be.

The only consolation is that a special introductory offer is being made at £80 for a year's subscription (12 issues now, remember, not 26) and unlimited access for one account-holder to the TransportXtra.com website. This is still more than a subscription to [old] Transit up to last December.

Now let's turn to TransportXtra.com. The exclusive website, run by Landor's main company, Local Transport Today, contains the "whole Transit archive of news stories". Does this extend back to when Transit was first formed, in the late-90s? Not quite. August 2005 is as far back as Transit's archive extends. What about 8 years prior to this? Why state that full access to your archive is possible through TransportXtra.com when your full archive is not what you'd ordinarily understand it to be?

And where is John Nelson and his infamous Nelson's Column? This used to be a great read.

New Transit has a per issue price tag now: £4.95. Incredibly, this gives the impression that a year's membership (12 issues) through individual payment is only £59.40 - not the massive £95 standard fee, and £20.60 less than the special introductory offer. New Transit will say that the extra pays for the upkeep of TransportXtra, but with around 2-3 posts per day by Transit staff (all the other news stories are links to external sites, i.e. nothing to do with New Transit) there are far better sources of information if you want links to other media sources; the best of which is almost certainly TransportInfo.org.uk.

New Transit has been sent out to 5,000 addresses throughout the UK. You could be forgiven for thinking that, if you take New Transit, you're one of 5,000 similar-minded people. You're not. I've read elsewhere that the old Transit's membership was nowhere near that amount, nowhere near indeed. Perhaps this was the catalyst to revamp the production and to make it a "different animal".

How about they offer a year's magazine-only subscription for £59.40? They must have thought it through, after agreeing on a cover price per issue, and chosen not to do so. New Transit's remit isn't as broad as their bus counterparts (routeone and CBW) and rail contemporaries (RAIL, Today's Railway UK, The Railway Magazine) and consequently they suffer in terms of revenue generated through adverts: generally only senior management positions are advertised, not the plethora of lower-ranking positions on offer in the other magazines (listed above). Taking the news section away has only alienated New Transit further. It's bold. It's a gamble. It's very risky. (GL)