It had been in the pipeline for some months; a trip linking the two extremities on mainland Britain: John o' Groats to Land's End. But how to do it in our own, special, inimitable way? What was to be the LEYTR crutch? Researching the possible journey options for the greatest dissection of our island possible soon presented the 'angle' we would take:

John o' Groats to Land's End in a manner befitting the current financial downturn, i.e. as cheaply as possible. Time away from our respective employers and offices meant that a caveat was additionally placed upon our strapline: speed. Consequently, the LEYTR Top 'n' Tail jaunt would be done as cheaply and as quickly as possible.

One thing that specifically struck me about other people's John o' Groats to Land's End trips is that virtually all that have been written up only tell half the story. The publicised 874 mile trip forms only one part of a round-robin journey from the valiant traveller's home. He, she or they need to first get to whichever extremity they're to commence from and to then return home from its counterpart location. Our trip aims to cover all of this - with the to/from journeys being made in the same spirit as the main leg, i.e. as quickly and as cheaply as possible.

And so it was that I found myself at a friend's house in Lincoln. I'd travelled there the evening before so that both he and I could be correctly positioned for the day's initial journey, a trip to Scunthorpe by bus: a brand-new Scania/Enviro400 operated by Stagecoach in Lincolnshire to be precise. Service 100 only commenced operation in May 2006 and yet last month the hourly frequency outgrew the Alexander ALX300-bodied MANs that had been operating the route, being replaced with these new Enviro400s. The route forms part of Lincolnshire County Council's InterConnect network of services, which incidentally celebrates its 10th anniversary this year. 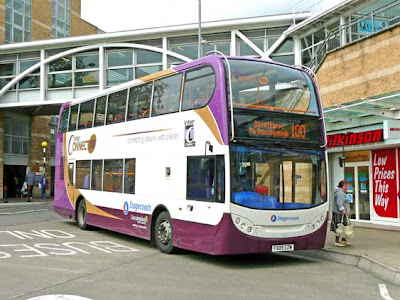 Brand-new Scania/Enviro400 seen in Scunthorpe, having worked the second northbound journey of the day.
We boarded 15507 (FX09 CZW) in Lincoln's City bus station, which formed the 0835 journey to Scunthorpe via Gainsborough. The Enviro400 body, while looking stylish and progressive from the outside, does not have an interior that emulates the same in my opinion. There's far too much rattling and banging for my liking - to think the bus is merely weeks old, too!! The ride comfort is okay though and the special InterConnect livery Stagecoach is starting to apply to its vehicles operating InterConnect services looks very striking (even if it does resemble a Cadbury's Cream Egg wrapper)!

The route is operated by Stagecoach's Gainsborough depot. Unlike Scunthorpe and Lincoln depots, Gainsborough has a few services that conform to the EC Drivers' Hours Regulation and so it made operational sense to take-back all diagrams in readiness for the new vehicles arriving (Lincoln depot did operate one diagram on the service).

We kept to time throughout on this relatively quiet Saturday morning and despite the sunny weather at all times, alighted in Scunthorpe to a heavy downpour. 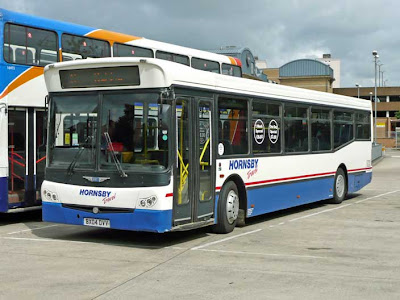 While Stagecoach may be the dominant operator in Scunthorpe, small independant Hornsby can still be seen in the town, now operating four main service, some of which jointly with Stagecoach.
Our next service was another operated by Stagecoach - their recently improved Service 350, linking Scunthorpe-Barton on Humber-Hull and re-branded FastCat. The service had been hourly with East Yorkshire operating one of the three diagrams. Now, Stagecoach believe that patronage was such that it would double the frequency to half-hourly, though East Yorkshire did not increase their diagram, continuing to operate one vehicle (of the 6 now deployed) to similar timings as before. Stagecoach purchased some new MAN/Enviro300s and an agreed brand and livery was adopted. At the end of March, the FastCat was born. 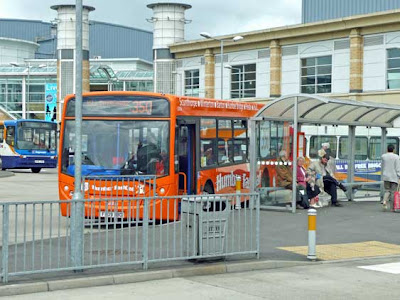 The Humber FastCat can easily be spotted here. There are many references to cats in the branding and advertising.
The livery is pretty awful - sentiments we understand that are shared by Les Warneford, Stagecoach Bus MD, but you certainly can't argue that the bright orange livery with grey claw marks is striking. East Yorkshire has offered a dedicated vehicle to the route, a Volvo B7RLE/Wrightbus Eclipse Urban, and it too is painted in the orange FastCat livery. Unlike the old 350 timetable, it is now impossible to know which journeys are operated by each operator. Stagecoach's Hull depot now also operates journeys on the service, being allocated two diagrams. This has never occurred before, with Service 350 historically being a RoadCar service. 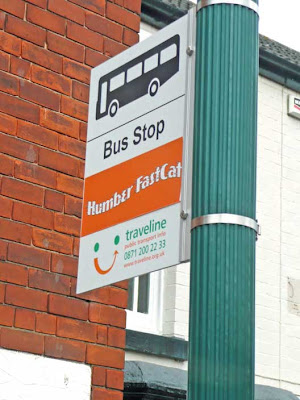 Stagecoach, EYMS and North Lincolnshire Council have joined forces to ensure publicity is visible at all stops. Every single bus stop flag along the route (even those at far-flung rural outposts) have FastCat-branded flags.
The old departure time was xx10 from Scunthorpe, with the new half-hourly departures at xx15 and xx45. We caught the 1145 and were pleasantly surprised at how quiet it was. A Saturday in Scunthorpe bus station isn't always the most enjoyable place to be, and with Hull being such a pull for youngsters in the area, I had prepared myself for a chav-fest aboard the bus. It was not to be. I suspect, though, that the xx15 departures past each hour would be busier on account of people not liking change and preferring to catch the journey most similar to that which operated before.

We wound our way along the A1077, diverting via Winterton and Wintringham until Barton on Humber. After passing through the town's market place, we called at the rail interchange. A Class 153 operates two-hourly from here to Cleethorpes via the Barton Line and Service 350's timings in both directions coincided with the arrival and departure times of the train. Now they do not. We understand, though, that a much greater connection time has been welcomed by the Friends of the Barton Line who believe that the old connection time (5 minutes) was too tight.

From here it was over the world's one-time longest single-span suspension bridge into the East Riding of Yorkshire (but not for long) before entering Hull. 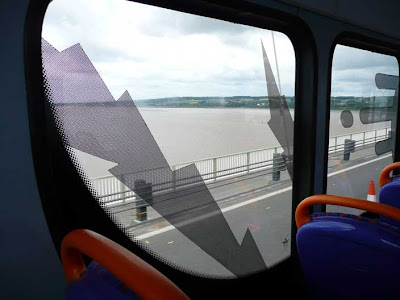 This is the 'view' passengers have as they cross the second longest single-span suspension bridge in the world - the underside of the FastCat's contravision claw all over the window.
Stagecoach successfully bent the Humber Bridge Board's (HBB) arm into offering a discount to PCVs operating stage-carriage services across the Bridge. They did so only by threatening to completely withdraw the only direct service linking Grimsby and Hull though. There was much uncertainty for regular passengers on both sides of the Humber for many months until, eventually, a breakthrough was made in 2007. Very few operators object to paying a fee to cross the Humber Bridge, but most are angered at the difference in price a bus is made to pay over a car. Currently cars pay £2.70 and PCVs pay £10.60. We understand numerous operators wouldn't regularly object to the toll increase (forcing a public inquiry each time - at great cost to the HBB) if the fee a PCV paid was, at most, double that paid by a car. On other bridges throughout the UK, this is very often the case.

From Hull we sampled our first-ever trip aboard a Megabus vehicle from the city. A full write-up of this journey will appear in another media sometime soon.

Once in London, we visited the Montagu Pike Wetherspoons pub in Soho (two 2-course meals and drinks for under £20 in zone 1!) before taking a steady walk to Victoria train station where we would meet the third and final member of our trio. Once convened, we headed to the coach station for the 2300 Service 588 to Inverness. 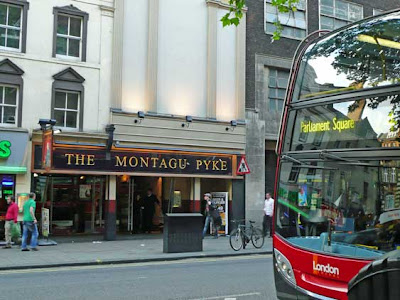 Both m'colleague and I are big fans of Wetherspoons - here's one of the cheapest places to eat in central London, the Montagu Pike. This hostelry also acted as my local for a couple of years.
National Express officially measure this route to be 581.4 miles in length and it therefore makes it their second-longest coach service in the UK. With the equivalent journey by train equating to more than double the on-the-day fare NX offer (ironically it's NX who also calculate the train fare, too!), it fitted well within our remit. Bruce's Coaches operate the service now, taking over from Rapsons not long after Stagecoach purchased the group. Rapsons used 04-reg Volvo B12Ms with Jonckheere bodies; Bruces prefer VDL/Bovas, though on our journey a tri-axle Scania/Levante was working, with its rear-end adorned in a contravision blue cross, signifying the Scottish flag. 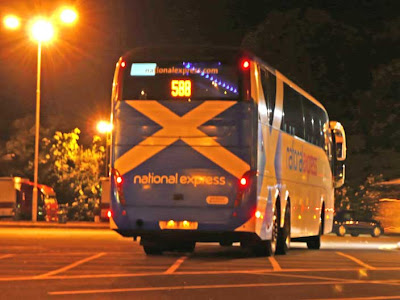 Bruce's Coaches' tri-axle Scania/Levante C53Ft - very comfortable thanks to the additional leg room. The coach is seen here at Keele Services, the first of two short stops en route to Inverness.
Normally, NX's tri-axle Levantes have 61 seats (the twin-axle versions have the standard 49 seats), though we were very impressed to see that Bruce's versions have only 53 seats yet measure 14.2m in length. Consequently, the leg room was very good indeed. We all commented well into the journey just how much difference a little more space makes a lengthy journey like this. We had two drivers who would between them take us to just beyond Glasgow, by which time it would be Sunday morning. Both work part-time for Bruces and one was ex. Stagecoach, implying he'd driven the service before, to which we understood to mean during Rapsons days. One even though he recognised yours truly. We had a brief discussion about whether this was fame or infamy. We never did get an answer!