"The last thing you want to do if you have a chance of winning is piss off the client by launching legal action against it."

That's the opinion of a rail industry executive on the likelihood of Stagecoach being awarded the forthcoming South Central rail franchise.

South Central covers the existing Govia-run Southern franchise (London, Kent, Surrey, Sussex and Hampshire); the Gatwick Express (formerly National Express-operated but taken on by Southern last June) and also the Tonbridge-Redhill line, which was operated by Govia's Southeastern franchise before being brought into the Southern business last December.

The four shortlisted operators are:
"Well placed industry sources", commented Transit last week, "say the DfT has been speaking to only one of the four bidders for the past week and a half". 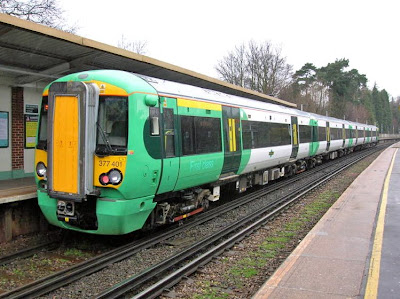 Southern operates a large number of electric traction. Seen here is one such example, a Class 377
We're willing to believe the anonymous industry exec when he said Stagecoach's chances are virtually nil and we reckon National Express appears very unlikely to be awarded another rail franchise at a time when there's talk of its East Coast franchise being the sole cause of the group being "within a hair's breadth of breaching its banking covenants".

This leaves NedR & Southern to battle it out. The incumbent has much experience in the south of England, operating rail services in the Garden of England; its record in the London commuter market speaks for itself. The joint venture has limitations in terms of further growth and so it may well represent a safe pair of hands at a time when the government has stipulated that no financial assistance will be offered to those train operating companies who aren't cutting the mustard. NedR has been in the news recently, relieving NX of its London bus network. It is being seen as the wildcard bidder now. 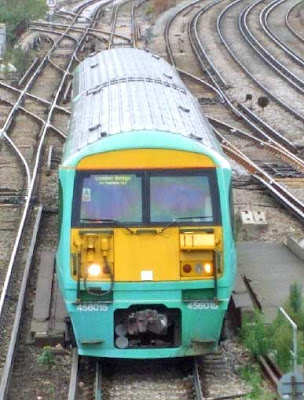 Seen here near Wandsworth is a Southern Class 456.
Could the Dutch state-owned NedRailways really win the South Central franchise from that being ostensibly operated right now by Govia? We understand that it has the financial backing to outbid the competition and by virtue has no stakeholders to justify its actions. South Central could be a neat fit.

The franchise will commence this September and run until July 2015, with a possibility of a two-year extension at the DfT's discretion, dependant upon performance. (CW)