I'd like to say how fascinating I find your blog. From top tips warning Hatfield train travellers from certain platforms at their station and humorous signs on train windows offering heavily drugged sloths as a transport alternative, to the more serious such as today's excellent Crossrail revue and details of the recent troubles in Sheffield, A Transport of Delight is a very entertaining read.

I am the Commercial Manager for [removed by request] and we, like Stagecoach, utilise Best Impressions for our external advertising. I took particular notice when I read your entry suggesting there was a proof-read oversight in East Anglia and certainly concur with 'CW's comments about the missing hyphen and apostrophes, though feel I ought to offer some form of reasoning on behalf of those of us out there who employ third-party ad' agencies.

Yes, we proof-read and yes, what is placed on our vehicles is ultimately down to us - errors and all. We have, in recent years and in my opinion, become perhaps a little too reliant on these agencies dreaming up new initiatives and slogans for us, though if we didn't want it then we simply wouldn't pay for it. However, in the specific case of the rear advert Stagecoach applied to its Peterborough fleet, its defence is almost certainly that no one in their Commercial Department thinks it's wrong or that they did spot the faux pas yet the 'feel' to the advert dictated the way it was produced, i.e. omitting certain grammatical punctuation to fill certain criteria. Many of these ad' agencies have latched onto the massive impact the Internet is having and how people tend to write far more notes than letters - notes tending to see relaxed S.P.A.G. and this style has simply been transferred to this style of advertising.

Hence 'Tube' in Oxford tube is in lower-case lettering and even 'trent barton' as a company name! Yes it's literally wrong - unforgivably so in the eyes of many academics and anyone with at least an A Level, but it reflects the overwhelming writing style of many people bus companies want to attract. It also subliminally makes things look simple, easy and a lot less cluttered.

Removing hyphens and apostrophes is merely reflecting the way in which online correspondence is changing - arguably for the worse - and that fewer and fewer people know how to use grammar correctly. My company use Best Impressions and we've seen unprecedented levels of growth, much of which is directly attributable to the advertising and branding they provide for us.

The adoption of small-case lettering in company and service names is grammatically wrong.
In summary I feel there are two defined writing styles: that which should be accurate and for dedicated readerships, such as magazines, books, newspapers (even blogs) and that which should be less so - for slogans and strap-lines, for the use on buses, for example.

One of the biggest problems we large operators face, that I can see looming on the horizon, is that the true beneficiary of our re-branding exercises are the ad' agencies. While visiting relatives in Abingdon last month, my 7 year old daughter thought my company had started running buses there as City of Oxford's Abingdon Express buses were almost identical in the style to that used by my company and we couldn't be further detached from their business if we tried. 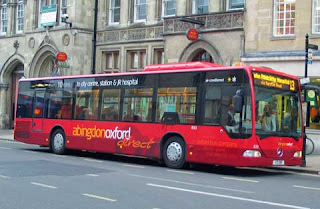 A 7-year old spotted that this livery is very similar to another operator's livery elsewhere in the UK. Certainly, when a fleet is 'Best Impressionised' it is immediately noticeable as such.
That woman, pictured peering above the rear engine flap on the rear of the Stagecoach Dart in Peterborough, can be seen on at least three different bus operators' vehicles around the UK, for example and while Stagecoach's corporate livery is very unique, others around the country - who have used the same ad' agency - are far less so than at any time post-deregulation in my opinion. If a 7 year old girl can tell the similarities, I shudder to think how many others can.

This has been a fascinating subject. We've received 8 communications regarding the rear-end post in Peterborough. Everyone agrees that CW's observations about the grammatical shortfall, that both Best Impressions and Stagecoach let slip through their nets, is accurate. One pointed out that there was an unnecessary hyphen in rear-end, which we believe to be true, others were a little confused as to why 7 days' should have an apostrophe at all! Having chatted with CW plus a few others who've cared to listen, we believe that adding an apostrophe, hyphen and capital letters where necessary, can be done without detracting from the 'feel' of the advert or image that is trying to be portrayed. (PW/GL)