The evening of 29 March saw a shunting accident at Alstom's Wembley depot in north London in which two of Virgin Trains' Class 390 Pendolino trains were damaged.

390006 was shunting into a wheel lathe when it derailed over a set of points and hit sister train, 390008. There were no injuries but both trains sustained damage. 390008 re-entered service last week, while 390006 had its axles inspected and while the damage sustained was less severe than first thought, the train is expected to be out of action for a couple of months.

The points over which 390006 was reversing are thought to have moved, causing the collision. It is this aspect which Network Rail is looking into, leading an investigation to which both Virgin Trains and Alstom (who built and maintain the Pendolinos) are assisting with. 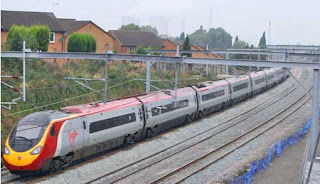 Following a collision at Alstom's Wembley depot between two of these 9-car Pendolino trains, Virgin has been forced to hire-in a Class 90 and Mk3 rake of carriages.
In the mean time, this has seen Virgin Trains fall short of Pendolinos for their daily peak vehicle requirement of 48 out of 52. They have chosen to re-introduce a Class 90 and Mk3 rake of carriages to plug the gap left with a Pendolino out of service.

Stephen Knight, Virgin Trains' Communications Manager, told LEYTR that the Class 90 will be allocated to a specific Virgin Trains diagram as follows:

Each seat on board the Mk3 set will have a letter explaining why this type older carriage is being used and goes into some detail to explain the incident at Wembley at the end of last month. In addition to the above, altered diagram, the 0630 Rugby-Euston and 1846 Euston-Preston services will be operated by Class 221 Super Voyager.

Seen here is a Class 221 Voyager that Virgin replaced its Class 90s with on its CrossCountry franchise, which is now operated by Arriva. A Voyager is to operate a return trip for Virgin on their West Coast franchise while Pendolino 390006 is out of action.
Virgin Trains used Class 90s before the introduction of Voyagers and Super Voyagers on its erstwhile Virgin CrossCountry franchise and Pendolinos on the West Coast Main Line (WCML) . Class 90s have never really left the WCML, with EWS and now DB Schenker using them to haul freight. A total of fifty Class 90s were built between 1987-1990 at British Rail's Crewe Works. The electric locos can attain a top speed of 110mph - somewhat slower than that which Pendolinos can reach. 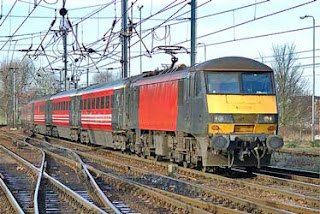 Class 90s were regularly used on the CrossCountry and West Coast franchises by Virgin until 2004. Seen here is a sight once very familiar.
The last Class 90 Virgin Trains operated in normal service was 900015 on 27 August 2004 on a return trip between Euston-Glasgow Central. Most of Virgin's Class 90s moved to National Express' 'one' franchise, now National Express East Anglia. Occasionally Virgin Trains has used Class 90s to haul additional services, and on these occasions has hired Class 90s in from EWS/DB Schenker. (GL)