End in sight to painting the Forth Bridge

It's often a trick question in pub quizzes:

How many years does it take to paint the Forth (rail) Bridge?

After much umming and arring a collective groan can be heard from the audience when the correct answer is read out at the end:

The painting of the Forth Bridge is perpetual: it never ends. 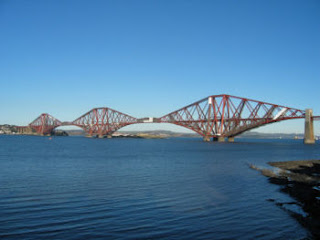 Reputedly the Eighth Wonder of the World - the magnificent, if unusual, Forth Bridge.
And why is this? Such is the task to place a layer of paint over the structure that by the time the painters reach the end it's time to start over again. In actual fact, the painting of the Forth Bridge has never been done systematically; different sections of the structure corrode faster than others and so require more attention. The quiz-master's question is actually based on myth. See if that gets you a point added-on!

Eagle-eyed viewers to BBC's educational comedy show QI last month will have picked up on the possibility of pub quiz-masters now having to amend their question on the subject. Thanks to advances in technology the current Forth Bridge re-paint will be completed in just under 10 years.

The red paint currently being used is a form of epoxy resin expected to last for between 20-30 years. A re-paint takes approximately 10 years so there will be a further decade at least where painting will not be required. 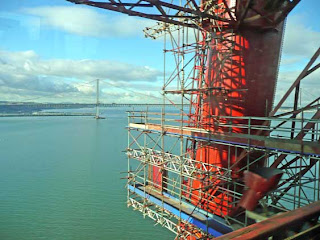 This is a shot I took as I crossed the Bridge on board a First ScotRail Class 170 'Turbostar' bound for Inverness. The red paint is made from a special epoxy resin that is expected to last between 20-30 years, almost three-times as long as now.
Sure enough, the Forth Bridge is a magnificent structure. We crossed it on our most recent Scottish jaunt last month. Opened in March 1890, it was the world's first steel, long-span, cantilever bridge, taking 7 years to build and injuring 450 of its construction workers with 98 actually being killed. 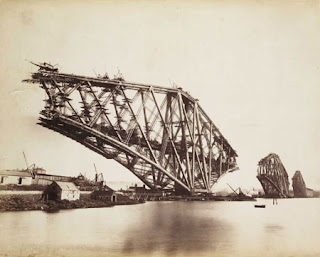 Taken in 1889, this photo shows the Bridge's construction.
Spanning the Firth of Forth, the 1.5 mile structure was designed by Sir John Fowler and Sir Benjamin Baker, following work initially undertaken by Sir Thoman Bouch - responsible for the Tay Bridge near Dundee - who died before the final design was agreed. The bridge comprises three girder bridges within the overall structure and boasts two main spans measuring 1,710 feet across and was built with 55,000 tonnes of steel - the very first rivet was drilled in by the then Prince of Wales, Edward VII. 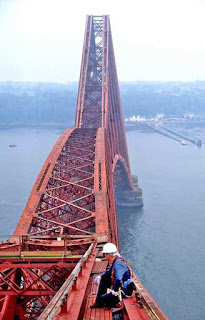 Balfour Beatty maintain the Bridge on behalf of Network Rail. Their employees certainly need a head for heights!
National Express East Coast, CrossCountry, First ScotRail, DB Schenker and First GBRf run across the structure, which is owned by Network Rail and maintained by Balfour Beatty. (GL)