Around six months after Stagecoach purchased Highland & Country and its Rapsons subsidiary, improvements to the service offered to passengers wishing to travel north from Inverness, along the east coast, to Thurso and Wick were introduced. We both travelled on this new Service 25X back in November, and were suitably impressed with the new Volvo B7Rs allocated to this lengthy yet vital link to the Far North.

Yet the B7Rs do not have toilets fitted and with an end-to-end journey time of a shade over four hours, this has been causing problems for those residents in Caithness who wish to travel on the route.

A five minuted timetabled break is shown in the current 25X timetable at Dornoch, where passengers can avail themselves of the adjacent facilities (next to the abattoir). This can't have done enough to satisfy local residents, and so on my second trip to Wick using Service 25X last month, I was a little shocked to see this vehicle operating the 0855 ex Inverness: 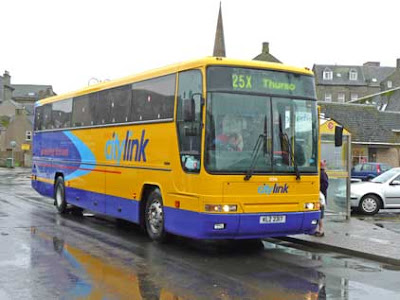 KLZ 2317 seen at Wick's Somefield Bus Terminal en route to Thurso
KLZ 2317 was originally registered X465 SAS and is a generic Volvo B10M-62/Plaxton Expressliner 2 C49Ft, once the mainstay of Anglo-Scottish National Express services, being new to Rapsons and operating overnight Service 588 between Inverness-London Victoria for the first seven years of its life. It's since been downgraded to shorter-distance Scottish Citylink duties, and according to my driver, 'pinched' by Inverness depot for allocation to the journeys on Service 25X that run between Thurso and Inverness. Equipped with a toilet (and improved luggage provision) they tick a couple more boxes than the B7Rs did. 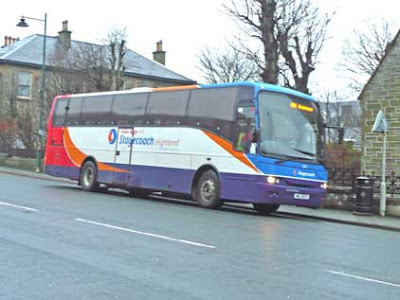 MIL 5573 seen in Thurso town centre about to undertake the last Inverness journey of the day
The return trip from Thurso was operated by a Stagecoach-liveried Volvo B10M/Jonckheere C43Ft, MIL 5573 (above). This was a former Citylink-liveried vehicle, with a sunken, central toilet. It was originally registered R775 PST and new to Rapsons. Its manual gear box caused problems with a subsequent driver change in Tain, when the intending driver was only qualified to drive automatic or semi-automatic vehicles. Still, the unscheduled deviation via Tain Depot was a novel experience, and we moved onto a B7R for the remainder of the journey to Inverness. 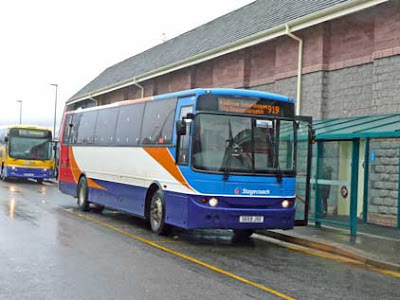 S659 JSE operating Scottish Citylink Service 919 seen in Fort William. Service 25X may now have on-board toilets but at the expense of some of Citylink's more expensive services
Both this (S659 JSE) and sister vehicle S658 JSE seemed to be working all journeys on this service all day. Not a Citylink logo or sticker in sight, save the small blu-tacked paper notice high up in the windscreen. Not was there the advertised toilet! We returned from Fort William on board sister vehicle S568 JSE, which initially showed 'megabus.com' on its destination - Fort William being somewhere that the Megabus brand will surely never reach, when passengers there are currently paying premium coach fares to travel with one operator, and it is that operator who also owns the Megabus brand.

Stagecoach's stake in ComfortDelGro's Scottish Citylink network (the Joint Venture) is sure to throw-up the occasional odd working; indeed, Citylink's e-tickets state that their services may operate using vehicles in either their livery or that of Megabus - nothing about Stagecoach corporate swoops, and certainly nothing in Stagecoach's Service 25X timetable about Citylink-liveried vehicles being used on its new, flagship routes.

There is certainly a feeling of a free-for-all taking place in northern Scotland, my thoughts being compounded when I travelled on Stagecoach's local all-stopping Service 77A between Wick and John o' Groats that was provided by yet another Scottish Citylink-liveried Volvo B10M/Plaxton Expressliner!! 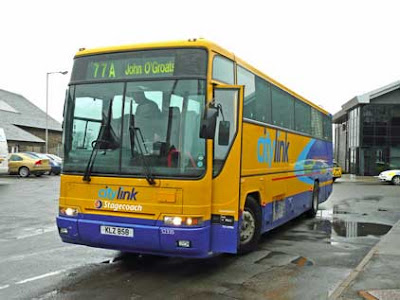 Last time I travelled on the 77A a Mercedes-Benz 814D (K514 NST) was used - quite a contrast to now
However, some of this has been brought on at the request of passengers using Service 25X - a route that now sees its full-length journeys operating with toilet-equipped coaches. Perhaps if Stagecoach had no financial involvement in Citylink another outcome would have occurred? (GL)