It was the subject of discussion at one of our thrice yearly LEYTR Committee Meetings today in Skegness, that Luton Airport has decided to introduce a charge of £3 per passenger wishing to jump the queue for security checks. 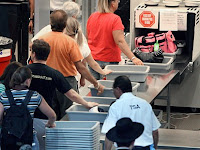 Luton's queue-jump fare is the first to be adopted in one of the UK's larger airports, following on from a similar scheme at Leeds Bradford, Liverpool and Bristol airports, which have been charging a fee to do the same for a while now and charging up to £5. The UK's largest airport owner, BAA, has said that it is considering introducing a similar scheme at some of the airports under its ownership.

The potential for controversy at Luton arises from the fact that passengers paying a fiver will simply be authorised to jump the main security queue; these fast-tracked people will not have a separate security queue of their own, something other fast-tracked services at airports have. Those at the front of the queue who're made to hang-fire for a few minutes while the fast-trackers push in is not going to go down well.

How many will pay a fiver? On the recent occasions I've flown from UK airports - Gatwick once, Stansted once, Luton once and Heathrow once - in the past year or so, I've always done the responsible thing and ensured my arrival is sufficient to ensure there is no mad-dash through security for fear of missing final boarding. On the occasion when we flew from Heathrow T4 to New York last September, the security queue was a welcome distraction from the ridiculous 3-hour international check-in that's imposed. 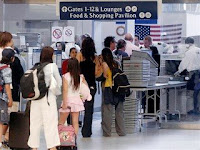 I guess that for as long as people are in a rush, mis-timing their arrival through their own negligence, or being delayed due to traffic congestion, there will be a market for this type of initiative. Some are worried that airports will abuse the system by choosing to open dedicated lanes for the fast-tracked passengers only to have an adverse effect on standard queues, lengthening the time taken to pass through security here. Crucially, additional staff are not being deployed in this area. This has not happened at Luton yet.

eastJet says it does not agree with this principle of paying to queue-jump as its fares contain an element that covers airport security, though it is willing to permit queue-jumping when boarding takes place, allowing those who've paid for the privilege to board first; the following 34 consisting of those who have hand-luggage only or the first to check-in; and finally everyone else. easyJet is the main flyer from Liverpool and the John Lennon Airport was the first to indroduce this fee back in 2007! (GL)