These seemingly innocuous paint marks on a road in Beeston, Nottingham, have caused much local outcry in the pages of the press there. For it is these multi-coloured daubings that show the local authority is undertaking preliminary works in measuring-up for Nottingham Express Transit (NET) Phase 2 tram extension.

NET Phase 2 will link Beeston and Clifton with Nottingham city centre and the existing tram network, stretching as far north as Hucknall.

Rather than be delighted at the prospect of a clean and efficient mode of transport in their areas, local residents have accused NET's planners and the local authority in general of "riding roughshod" over the wishes.

In particular, those who will have the tram pass their front door feel most aggrieved, not least because NET Phase 2 hasn't actually been given the go-ahead.

Said Carol Wallis of Lower Road, Beeston, "They are riding roughshod and I think it is cruel to take the tram through a quiet residential area." Having lived in the area for 38 years she continued, "People will accuse me of being a NIMBY, but if they were going to have a tram passing just feet from their front window they'd feel the same way."

A lot depends on exactly how close the tram passes her front window, but if the rest of the tram network there is anything to go by, trams will pass at a greater distance to that of cars down the same street. I feel that, if faced with a new 10 minute bus service, operating from 0600-2300 on a daily basis, the prospect of a tram over a bus if far, far more beneficial for residents simply because a tram is virtually silent as it passes - unlike a bus, even with a Euro 5-rated engine! 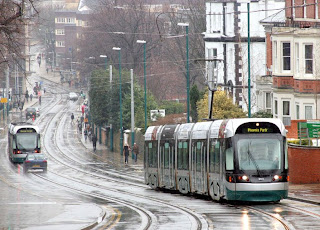 Although a public inquiry (PI) took place last year, there has been no further consultation. But then, if the decision of the PI had been satisfactory to all concerned, would there be any need for yet more red tape? Residents in Beeston seem to think so - I hope they attended the PI and made their views known; so often this is not the case!

Steve Barber, a Beeston Borough Councillor, said the preliminary works were designed to save time and money and that it is estimated that 11,800 new jobs will have been created by 2021 as a direct result of NET Phase 2.

He commented, "If the scheme goes ahead, the contractors will know exactly where the underground services are and be able to take up less time. The tram will be a conduit for investment, with many more business developments and jobs along the tram route."

A spokeswoman for the planners behind NET Phase 2 confirmed that the markings were to do with Phase 2 and said "Work has been carried out at certain points along the proposed NET Phase 2 route to identify where key utilities are. This was a non-intrusive survey to give a better understanding of what is where."

We understand the Department for Transport is currently considering whether or not to give the go-ahead to NET Phase 2 and that their firm decision is likely in the spring. (GWB)