The lawyers run the railways

Transport author and journalist Christian Wolmar is never afraid to air his views. His two-page spread in each edition of RAIL is always an entertaining read, that's for sure, whether you agree with his opinion each week or not. An extract he kindly reproduced in his latest feature had me shaking my head.

Virgin Trains has greatly reduced the number of trains calling at Milton Keynes with the introduction of its new timetable, wishing to focus on services covering longer distances. Govia's Southern train operating company had a franchise commitment to operate new services between Milton Keynes-Kensington Olympia-Clapham Junction, but Virgin were opposed to this as, despite its reduced services here, they were concerned that this could have a detrimental effect on its profits, as currently competition is not permitted on the West Coast Main Line.

Virgin wanted the Office of Rail Regulation (ORR) to side with it and not allow Southern to operate these new services.

Why? Well Virgin has an agreed monopoly between Kensington Olympia-Milton Keynes, except for services "which calls at or passes through" Clapham Junction, provided that they do not terminate at a central London terminal. Southern's proposed services seemed to fit this criteria: its proposed services would terminate at Clapham Junction, i.e. not a central London terminal, but Virgin argued that "calls at" and "terminates at" were not the same. In the end the ORR ('s lawyers) had to publish the following that dismissed Virgin's claim in favour of Southern's. 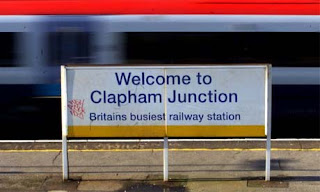 "West Coast Trains [Virgin Trains] has emphasised the distinct use of 'calls at or passes through' in one sub-clause and 'starts or terminates' in the other as evidence that they are to be attributed distinct meanings. We do not suggest that the verbs are interchangeable, but simply that 'calls at' has a broader meaning than 'starts or terminates' as it can occur at any stage on the journey. The context does not suggest that the two sets of verbs are intended to be mutually exclusive, merely that the narrower reference to the start or termination point was deployed in the second clause specifically to encompass those routes with start/end points beyond their named stations."

As old Wolmar puts it "Essentially, it means that the ORR accepted Southern's interpretation that trains terminating at a station also called there, which is rather gratifying for passengers who get there"! (CW)