When you think things can't get any worse in this volatile week, we are bringing you a tornado warning that those at the Met Office seem oblivious to.

This Tornado, however, is almost 50 years in the making and likely not to leave a trail of destruction in its wake. Its route is already pre-determined and passes through the LEYTR area.

If you've not already sussed it, the Tornado is none other than the world's newest steam engine, completed last year and about to make its second voyage along the East Coast Main Line (ECML). 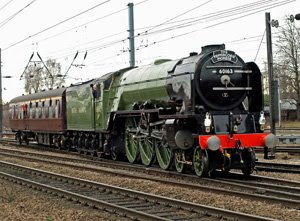 Commencing its journey at Darlington and hauling The Talisman, the first new main line steam train to be built in the UK for around half a century, will pick-up additionally at York before running non-stop to London, passing through Grantham and Peterborough amongst other localities en route.

Tornado is a Peppercorn class A1 Pacific steam locomotive, numbered 60163, and such locos were once a regular sights in London termini. Its named service, The Talisman, is as many steam enthusiasts will be aware, the name given to the British Rail London-Edinburgh express service that revitalised Anglo-Scottish rail services along the ECML during post-war Britain, first operating on 17 September 1956 and being hauled by one of Tornado's original contemporaries.

With 13 carriages and an estimated 500-tonne haul, the new steam loco will have her work cut-out. Tornado has recently been turned-out in an original Peppercorn loco livery of apple green and will bear the name British Railways on her tender, as had been the case with 30 such locos when they were new.

The forthcoming, historic charter is believed to be the second passenger service Tornado has hauled, with the first being on 31 January between York and Newcastle, in the presence of the world's media and around 10,000 onlookers. Extensive testing was undertaken in the latter half of last year. 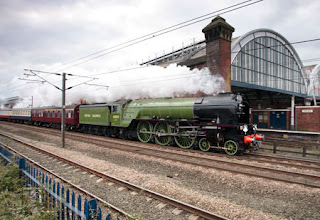 By prior arrangement with National Express East Coast, Tornado will stable at King's Cross for around an hour after its arrival. The Talisman's northbound return journey will be hauled by modern traction, departing KX at 1748 and dropping off in York at 2117 and terminating in Darlington at 2158.

Some BBC video footage may be viewed by clicking here.

Tornado's next planned railtour is on 18 April when it will operate The Yorkshire Pullman between London King's Cross and York, hauling the VSOE British Pullman train. (GL/PW)