What's in a name?

Apologies to those reading this in the Shetlands or Orkney Isles, both locations being home to villages with the name displayed in the photo below. 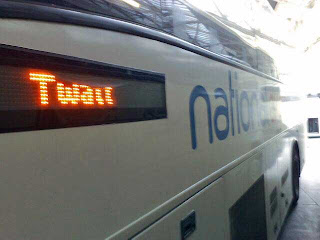 Despite its colloquial connotations, it's the first time I've come across Twatt, be it the one on Shetland or Orkney. It is programmed into a former Rapsons Volvo B12M coach, currently operating on the National Express coach network. Rapsons had operated two services for NX until September, when their new owner, Stagecoach, chose, with mutual consent, to discontinue the diagrams - Bruce's Coaches being the beneficiary of the 588 (Inverness-London) and Coach Miles the 509 (Swansea-London). 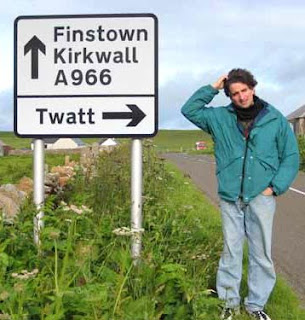 Rapsons, being the major operator of bus services in the Scottish Highlands & Islands, must have a route that passes through Twatt (perhaps both Twatts?) - not that this coach is ever likely to have been there of course. It can be a very useful feature on a coach though, the electronic destination display units, retaining as many as 1,000 or 9,999 destinations (depending on the technology used).

There are plenty of humorous village names in the UK. Twatt has origins to Scandinavia, being Old Norse for a 'small parcel of land'; it also has one of the most photographed sign posts in the UK. Here are a selection of some of my favourites (a few of which are to be found in the LEYTR area):