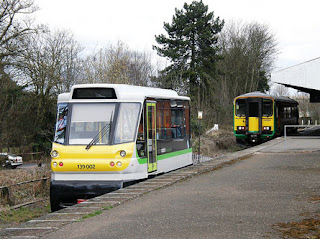 Stourbridge Junction on 28 March 2009 where one of the Parry's People Movers shares track with a Class 153. Photo: Banbury Bob


Parry's People Movers were due to supply a new type of vehicle, which they call a 'people car', to London Midland for operation on this branch line the following week; however due to a delay while testing continue, passengers are being bussed between Stourbridge Junction and Stourbridge Town stations as London Midlands' Class 153s have been assigned elsewhere.


The people car being allocated to the service has been allocated number 39001 and will be painted in London Midland livery and is depicted below:

It was in 2004 that a people car being used to replace Class 153s on the Stourbridge Town branch was reported in the media as being a real possibility, with the West Midlands Express & Star reporting the possible use of such a vehicle as part of the area's Community Rail Programme; 11 December 2005 dawned the first-ever trial of a people mover on the line.

In March 2005 a report carried in the local media recognised that light rail service would be better suited to the branch line than conventional heavy rail, with the go-ahead finally being given to the end of heavy rail service at the start of 2006.

The seven day operation of a people car will see the first Sunday service to Stourbridge Town since 1915. When the vehicle will become operational is yet to be known!
Posted by LEYTR