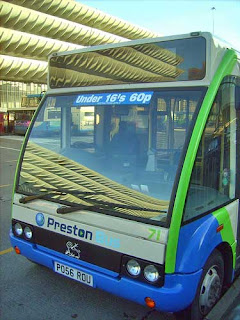 Could the foot leather of Preston Bus' workforce be pressing the accelerators pedals of Stagecoach vehicles sometime soon?

The opinion Preston Bus' loyal workforce has of Stagecoach is no secret at all. When Stagecoach started competing within the city of Preston in 2007, the retaliation by employee-owned Preston Bus was regularly reported in the national media, as was the tactics used by certain employees of Stagecoach.

Despite two Stagecoach employees having their licenses suspended by the North West Traffic Commissioner for underhanded tactics, the Scottish-based transport group still managed a very impressive 6th place in the list of Most Respected Companies in the UK for 2008.

At the end of last month, Stagecoach approached Preston Bus with a bid for their purchase, believed to be an amount in the region of £6.4 million. One of the reasons why the Preston Bus workforce remained so loyal to the cause has now been put to the test in another way: each employee with a stake in the company (120 in total) could stand to receive a £30,000 windfall as a result of the sale. Not everyone at Preston Bus is said to be happy as around 180 employees are thought to have no stake in the business at all.

Not surprisingly, Preston Bus' MD Peter Bell has a gagging order placed on him by Stagecoach, precluding him from giving any details of note. He did say that was a shareholders' meeting on 21 January where a decision would be made - a decision we understand that could see 44 Preston Bus employees being made redundant if the sale to Stagecoach is given the go-ahead.

But would Stagecoach's purchase of Preston Bus ever be given the green light by the regulatory authorities. Remember it took the Office of Fair Trading (OFT) almost six months to okay their purchase of Cavalier Contracts in Lincolnshire and that ComfortDelGro-owned Scottish Citylink, in which Stagecoach has an investment, was forced to divest services in central Scotland as a result of the Competition Commission's (CC) ruling that passengers were being given less choice and that the potential for price-fixing was there.

With Stagecoach operating in most of Lancashire, Cumbria and southern Manchester already, would the OFT believe that by acquiring yet more of the same area, passengers would not lose-out by the lack of competition? I suspect that in this purchase, unless Stagecoach was to agree to particularly draconian undertakings imposed by the OFT, the purchase could well end up in the hands of the CC. (GL)
Posted by LEYTR