It was yesterday that marked 20 years since the UK's largest transport operator was formed, FirstGroup. Lead by the group's current chief executive Sir Moir Lockhead, it was on 20 January 1989 that an employee and management buyout saw Grampian Regional Transport (GRT) be purchased from Grampian Regional Council.

At the time, Lockhead presided over 225 buses and 600 staff as the company's managing director; today he is at the helm of one of the most powerful transport groups, employing over 137,000 staff and operating around 80,000 buses. FirstGroup is a FTSE 100 company. The GRT Group, as the company was known, made strategic acquisitions in the aftermath of bus deregulation and merged with the Badgerline Group in June 1995 to form FirstBus. It was in December 1998 that the company was re-named FirstGroup, to reflect its ever-growing rail businesses.

Buses are just the tip of the iceberg. First used to be a company who classed itself as a bus operator who also dabbled with rail franchises. Today, with its plethora of rail interests in the UK, it prefers to be known as a rail operator who dabbles in the bus industry. First operates trains along the Far North line to the most northerly British mainland stations of Thurso and Wick, while at the same time operating trains to the most south-westerly extremity of the British mainland, Penzance.

First also operate more buses than any one else here in the UK.

Back in 1989, GRT cost Sir Moir and his workforce £5.5 million; last year the company announced record profits of £360.1 million. Annual revenues for the entire group came to £6 billion last year 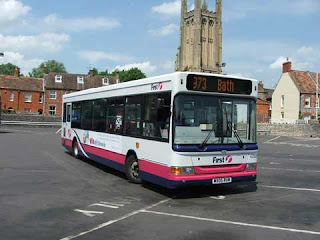 Based in Aberdeen since day 1, Sir Moir said time had flown by since it opened for business. He said, “We have been so busy in the last 20 years and have reached so many milestones. We could never have believed 20 years ago that we would be here, but we all got our heads down and worked hard to make it a success. One of our key strengths in reaching that success has been our staff – they have great experience, and wherever they work they are a part of their community. Later this year our new global headquarters will be finished and built here in Aberdeen, and we are all now looking forward to the next 20 years.”

Today, First operates not only in the UK, but also in Ireland, Canada, Denmark, Sweden and is the largest operator of yellow school buses in the United States of Amercia.
Posted by LEYTR