Trent barton has announced an order for 43 brand new buses, worth £6 million, for later in the year. The vehicles will feature their Best Impressions-designed 'cafe' interior. While trent barton has been affected by the current financial difficulties, they have identified that now, more than ever, the standard of service they offer is incredibly crucial. 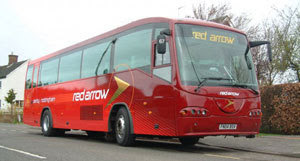 With more and more people having to sell their second car and those even less fortunate having to sell their only car, public transport could well benefit. It's when the financial slump starts to level out that bus operators will know if their effors at attracting and retaining new patronage have been a success. Having been forced onto your local bus service for a couple of years, when you've suddenly got more money in your pocket, would you return to the daily commute by car? With the current service levels operated by my local operator on my local route, I would regrettably have to answer "yes".

However, trent barton is hoping that those in the Mickleover suburb of Derby; the residents along the route of Service 15 between Ilkeston, Long Eaton and Sawley; those along the Alfreton-Derby corridor (The Nines); and those who catch the Rainbow 2 (Nottingham-Ilkeston) will stay with them by offering such a large investment in brand new, state-of-the-art vehicles.

The vehicles will be a mix of Optare Solos, Mercedes-Benz Citaros and Wright Eclipse Gemini-bodied Volvo single deckers. The first vehicles - Volvo/Gemini singles - are due to start being delivered at the end of March for operation on The Mickleover. The Citaros are rumoured to have cost the company £2.5 million and will be allocated to the upgraded Service 15 and Rainbow 2. Air conditioning will be fitted to the Geminis and Citaros.

With the introduction of these new vehicles, the cascading of older single deckers within the fleet will take place. It is expected that most Dennis Darts and Optare Excels will be removed from regular service.

But would trent barton, a company who in many ways has set an admirable benchmark in attention to detail and customer satisfaction, lose passengers to the motor car? I would suspect that if they can't retain custom then no one can! (GL)
Posted by LEYTR