Tube station sponsorship came a little closer today when Transport for London (TfL) admitted that it is looking at ways to increase revenue through a whole host of ideas.

Thousands of people pass through central London stations every hour, so one can only imagine the pound signs in the eyes of department store owners, sports kit makers, furniture manufacturers (Ikea already advertises on the Tube map) and soft drink producers.

"Figures in the millions" was the term used by TfL's group marketing director in describing what just a handful of sponsorship deals would earn them. The news broke in the Campaign magazine website. A tongue-in-cheek snapshot of central London Tube station names has been produced for the Going Underground blog and is shown below: 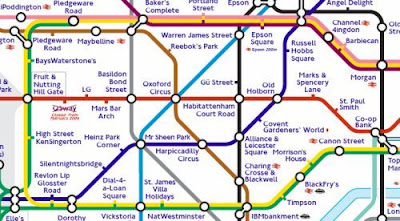