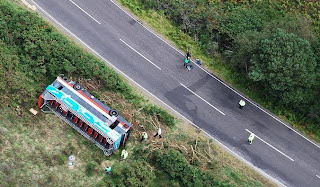 News broke last week (31 July) of a crash between a Wilts & Dorset open-top double decker and two cars, a Porsche and a VW Golf. The result of the crash saw those in the Golf require emergency hospital treatment, for which an air ambulance was summonsed; the Porsche driver be arrested on suspicion of dangerous driving; and most shockingly the W&D decker overturned, throwing its 15 passengers on the top deck into the foliage and trapping the 7 downstairs inside the vehicle.

Mercifully those travelling on board the bus, and its driver, were not seriously injured and none were detained in hospital. For avoiding action to result in a 12-ton open top decker to overturn it will have been travelling at a relatively *legal* high speed for such a vehicle; the section of road the incident occurred on was straight with no blind bends. One report I've seen suggests the bus was stationary. 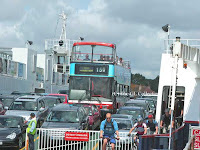 We've both travelled on the service in question; it's the only one of its kind in the UK to travel 'in service' using a chain ferry, which links Sandbanks with Studland. The open toppers used are relatively modern, when compared to many such examples being used elsewhere in the UK that pre-date decimalisation, and travel at relatively high speeds along the open roads south of Sandbanks, to/from Swanage. They certainly don't tootle at 20mph along an urban seafront like the examples deployed by Stagecoach and Coopers Tours in Cleethorpes!

Overturned PCVs are relatively rare, although two such cases involving National Express in 2007 has done nothing to eradicate the potential of this happening from people's minds - especially since in at least one of the NX cases, the driver was found guilty and sentenced; however, the W&D crash at least appears to be the fault of the Porsche driver and so the local media aren't intent on running negative stories about buses in that area and how unsafe they are.

The W&D involved in the crash was 3153 (N14 WAL), a DAF DB250/Northern Counties Palatine 2 CO47/30F, purchased from Walls, Manchester in 11/97 and converted to open-top by the autumn of 2000. A photo taken with its convertible roof applied (presumably taken during the winter time, although sporting side adverts for its summer deployment) can be seen here.
Posted by LEYTR