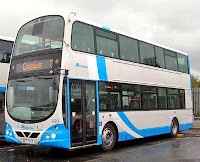 The LEYTR Editorial is planning a jolly to Belfast later this month and we've been scouring the net looking for transport-related stories and newsworthy items to get in the feel for the trip. Our contact there has mentioned on many occasions just how expensive bus travel is compared to that in Lincolnshire. S

So we were dismayed to see that Northern Ireland's largest transport operator, Translink, is set to increase fares on its Ulterbus bus division by 5% as a result of spiraling fuel costs.

It's easy to forget that with the onset of the economic 'stagnation' that far-flung localities such as the far north-west Highlands, the Welsh Valleys and Northern Ireland are equally, if not more so, affected.

Ciarán Rogan, Translink's spokesman, claims that its fuel bill will be £9 million more this year compared to last year. The Consumer Council in NI has accepted that the price rise is inevitable and hasn't chosen to criticise Translink, unlike the Passenger Transport Executive Group here in England, who's claimed four of the UK's largest bus operators have used fuel costs to increase fares only to maximise profits.

Also to rise are fares on Translink's rail division Metro. However daily and weekly tickets are to remain unaltered and for a limited period Translink is waiving the £1.50 online booking fee for its range of Ulsterbus Smartcards bought online.

Translink was formed as a result of the 1995 integration of Northern Ireland Railways, Citybus and Ulsterbus and was armed with one main aim: to promote the transfer from private car to public transport on a sustainable basis and the co-ordination of bus and rail services. Translink has an annual turnover of £168 million, operates just over 75 million passenger journeys each year and is one of NI's largest employers, with around 4,000 people on its books.
Posted by LEYTR