It is with great sadness I received notification from Derbyshire County Council's (DCC) Public Transport Unit based in Matlock that they have ceased production of their North-East and Mid & South Derbyshire bus and rail timetable books with immediate effect. They are to continue producing their Peak District timetable book and their free Rail Times book. Financial constraints are being blamed for the cuts.

I have in my possession every single timetable book produced by DCC since the summer of 1992. The attention to detail and the depth of information given in each book has always been exemplary. I've struggled to find a local authority who managed to produce information to the same high standard and obvious sound local knowledge base.

North East Lincolnshire Council, for example - here in the LEYTR area - produced its first ever comprehensive timetable book at the end of last year and unlike DCC it was available free of charge; however it was merely a book of copied timetables from operators in its area - even the same timing point spelling errors were carried over; mid-day frequency abbreviations done in the same places; and no mention of long-distance coach services or rail operators. 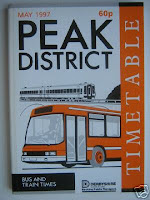 The fact that the Peak District book is continuing is something at least; certainly it is likely to be the most purchased book to date. I'll be honest in admitting on a few occasions that I'd often had concerns about the amount of worth the Mid & South Derbyshire timetable book had to its residents: it's the heftiest of the three chargeable publications and the majority of its timetables are for high frequency services in the City of Derby and arterial routes to and from this area - routes where timetables are not needed or in, for example Ilkeston, where residents would not be interested in bus services in Swadlincote.

Barry Doe - the man that single-handedly makes Rail magazine a worthwhile investment each fortnight - poses an interesting thought in relation to the withdrawal of 66% of DCC's timetable books: if ARGOS has a lean year would its 1800-page full-colour catalogue be withdrawn? Of course not! A commonsense analogy of timetable book production was also given: better to support 100 well advertised bus routes than 101 routes all kept secret.

A friend who is connected to public transport in the Matlock area told me that the reason behind the cost-saving measure to stop the production of the two books is down to the new DCC Transport Chief, Kevin Williams (a new broom and all that). He did jokingly say that he knows Mr Williams' wife and has set her on the case and is currently awaiting his scalp.

I don't think it's time for my friend to get the chainti ready just yet.

The Peak District Locals group is a community based Internet group that offers discussion on bus operators in the Peak District and has been in operation for many years. I'm sure the group will gladly welcome other mourners of this incredibly sad news!
Posted by LEYTR