One of the niggles I have about travelling by train during the evening is that the ticket barriers are invariably left open, allowing passengers to gain free access to and speedy exit from the platform. I fully comprehend the minimum staffing levels required to man such barriers, especially at larger stations, which is where most are located.

It is possible, for example, to catch an evening First Capital Connect train Peterborough to London King's Cross and not have to show or present a ticket to anyone or anything. More often than not this extends to East Coast trains, too. What signal does this give to people wanting something for nothing?

There are plenty of people who believe they have the god-given right to travel for free if they can get away with it. The Association of Train Operating Companies (ATOC) estimates that there are 110,000 such journeys made every single day on the national network. This is estimated to cost £200,000,000 every year - and those of us who follow the trials and tribulations of life 'on the trains' know all too well what that sort of money can buy.

And then there's me. And you. And every other honest and decent user of the railway who purchases their tickets before they travel; who leaves home/the office that few minutes earlier than usual in case there's a queue at the ticket collecting machines; who takes time to print off and carry with them their 'travel documents'. If witnessing fare evasion makes my blood boil, I'm sure it does yours, too. This extends to the railway openly inviting fare evasion as well.

On Friday the long-suffering Mrs LEYTR was dragged to Stamford, Lincolnshire, in order to make a short railway journey to neighbouring Peterborough along the old LMS route. This is the only stretch of passenger line in Lincolnshire that I've never done. And not a lot of it falls in Lincolnshire, either. Still, boxes needed to be ticked and all that, so there were were on Platform 1 awaiting the 1201 CrossCountry service bound for Stansted Airport. I'd used the self-service ticket machine to purchase two singles, totalling £15.00. 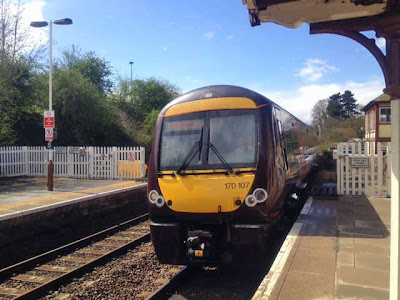 The train (170107) arrived with time to spare and we found a couple of seats within the three-car Turbostar. Upon departure, the guard came to check tickets. We showed ours within our section of the train, as did a few others who had boarded. At the first vestibule two young teens were stood and one refused to show his ticket.

"Nah, mate, you'll have to call the police. I'm not showing you my ticket" one said.

The other blatantly admitted to not having a ticket and neither was willing to purchase one from the guard. I couldn't overhear what the guard said back, but it appeared he just let them off. Part of me wanted to say "Can I have a refund then, since you're letting those two off?" but I didn't know if he was calling British Transport Police to meet the train at Peterborough as it was here that the pair were travelling.

And besides, there are nice, shiny ticket barriers at Peterborough station now so in theory they'd be challenged here and possibly made to pay - especially if the guard had called ahead.

So you can imagine my utter disgust for East Coast - who maintains Peterborough station - when we exited only to find all barriers open and unmanned.

This was in the middle of the day, not in the evening when most day returns have been purchased and train companies care less about revenue loss. It was a very poor show.

But what can be done? The McNulty Report wants fewer staff at stations, in order to save money. This can only make matters worse. Clearly there was perhaps 1 member of staff short at Peterborough on Friday which then forced the gates to be left open. The saving made with 1 member of staff is greater than the amount CrossCountry lost out on but that's just one case.

Ticket barriers should be operational at all times. If there are insufficient staff to man them they should still be working. All you need is one override button to temporarily open them all if gateline staff have been engaged elsewhere and the same button can be pressed to make them operational afterwards.

Apathy is the major problem I suspect. Similar with London bus drivers not caring one jot about passengers flashing their library card when boarding, many on the railway get paid the same regardless, aren't on commission and their employer still gets £x from the government regardless.

To be fair fair to the Guard and even Bus drivers, if your choices are to challenege the ticketless and risk stabbing or leave well alone, I can see what I'd go for. Especially when you know your boss doesn't really care either way except perhaps hoping you end up dead close to pay day to save money.

Of course an unmanned ticket barrier would stop the problem but maybe the firms running them consider the barrier more valuable than the human ticket checker?

Personally, I'd shoot ticket dodgers in the head as an example to others and I suspect so would many of us who religioulsy buy tickets as it's the right thing to do.

Because of the way fare increases are set, losses due to fare dodging during off-peak periods don't have a direct effect on what we honest travellers pay. On the other hand, if we shout too loud about how easy it is to get away with it then we encourage others to follow. Sad but true.

Most of us do enforce ticket policy. Besides BTP (Police) we have various other options such as unpaid fare notices & travel irregularity reports we can use to 'help' the passenger get from A to B. Tact and initiative works too... I was able to charge passengers, who were clearly after a free ride, as they got off the train recently! They seem to forget I control the doors! Not easy sometimes but hey that simply adds to the challenge! Ultimately we can't get it right all of the time and have to consider our own safety. If only we had stations manned for longer hours & barriers... Mr B

It is all to do with vigilance and expectation! If the expectation is that your ticket will be checked on a regular basis and that if you do not have one more than once or twice you will be prosecuted then you will buy the right ticket!
However, the the few honourable exceptions, the norm on London Midland is for the Conductor to sit in the cab and not to check any tickets, even during the day when the yobs are not about. Even if the Conductors do check tickets, they acnnot pick up the persistent offenders (e.g, Yes I know I got on before the station on the season ticket, but I had to visit my Gran last night and I did not have time to buy the add-on this morning).The appearance of Travelling Revenue Inspectors is as frequent as hen's teeth. The barriers at Euston are open from about 20.30 onwards, as is the barrier at my local station.
But putting things right would cost wages which might not be covered by increased revenue ...

All automatic ticket barrier lines must have someone in attendance to cater not just for those without tickets, vitally important, but also to cater for those whose tickets/permits to travel (staff passes etc)which do not operate the machines. As usual, accountants who don't know about the detail are allowed to make decisions about staffing levels which then have a deleterious effect on income.

This is pretty much the same across Eurpope or even wider. Paris Metro gates are open later in the evening. I travelled on a train between Malles and Merano in Italy the other day - trains operated by SAD Buses (!) and driver only. At one station, no doubt with visual communication between inspector and driver, just as the doors were about to close, the inspector dives on, followed by an incredible bang as the person sat on a tip up seat next to the door burst out of the train as the door closed! Leaving him outside waiting for the next train to do the next stage free of charge and the inspector helpless inside as the train departed.

In Germany there are no gates at all by policy yet many S Bahn trains are quite long and high capacity. In Italy I have come across 6 coach double deck trains on routes with unstaffed stations - the guard has no chance of ticket checking. Frankly here in the UK we do rather better than many countries - and don't forget, insofar as inter city trains are concerned, barriers are of limited use anyway since they cannot check whether the actual ticket put through is valid for any of all manner of reasons! Barriers (Gates) are really only of use on metro systems with very simple fare structures.

Travel by train is really enjoyable especially when the train pass by an airport and you see airplanes flying in the air. Great post! airport parking deals