February 2013 will be remembered on the national railway network as the month when the largest ever peace-time damage to the tracks and their foundations occurred. The landslip at Hatfield Colliery, with the striking images of its affect on the four railway tracks that run adjacent to the site, hasn't taken up many column inches in the national press, despite the route used by hundreds of trains every day being closed now until at least mid-May.

Hatfield Colliery is located north east of Doncaster, with the line that's been closed linking the East Coast Main Line at Doncaster with the former Humberside County area.  For those trying to reach Hull from the ECML, alternative routes are possible via York and Goole. For the northern Lincolnshire area, that borders the Humber Estuary, alternatives are considerably fewer.

The photo below was taken by LEYTR subscriber John Nicholson on 22 February 2013. It shows a site that Network Rail still cannot access as colliery officials say the spoil heap is still moving and cannot guarantee anyone's safety. 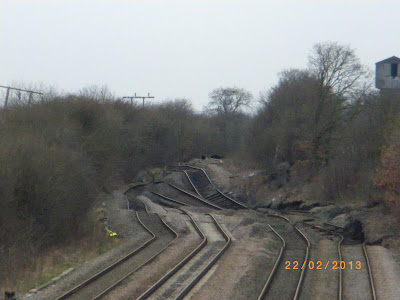 Imagine such a sight on the Brighton Main Line or the Great Western somewhere between Reading and Bristol. Admittedly, many more thousands per hour use these two lines in the peaks than this stretch between Doncaster and Thorne, but passengers here have other, longer, more arduous alternatives. Passengers living west of Scunthorpe have nothing, other than a replacement bus. Passengers living east of Scunthorpe (Grimsby and Cleethorpes) have the option of heading south west to Lincoln, thence Newark for the ECML, though travel from Grimsby to somewhere like Leeds or Manchester (a direct, hourly service operates to the latter, seven days a week) and there is no realistic alternative other than to prepare yourself to be de-trained at Scunthorpe for a coach service to Doncaster or Sheffield.

Landslips will happen and almost a certainty is that in the coming years something will trump Hatfield as NR's worst peace-time railway damage, it's the disproportionate level of interest shown by many London-centric organisations that annoys me. Would The Sun splashing the twisted tracks on its front page make the clear-up operation happen any sooner? Of course not, but it would assist local residents who have lost their train service for effectively half a year feel they'd not been forgotten.

Unofficial reports from contacts within both train operating companies who use the route have seen the potential of a closure for a year mooted. This would be unprecedented and clearly the worst case scenario TOCs and NR are working to. As train crews are trained to a higher level than many passengers consider, losing route knowledge of any section of line they are required to work for longer than a year will prevent them from doing so until they've been effectively re-trained (re-signed). When you consider all the drivers and guards at TPE and Northern Rail alone who'd need to be re-signed, if the line didn't open for a year there'd be a month-long hiatus once the 'all clear' was given so that this process could be undertaken. As distant as May sounds, this is by far the best option for everyone and one that I'm sure Network Rail will be working to... as soon as they're allowed to assess precisely how much work is involved.


The use of the Brigg Line from Barnetby to the ECML at Retford was considered for use by TPE, we understand, though ruled out in the end as this is the diversionary route for freight trains accessing the Humber Ports locations at Immingham and Grimsby. With this excess freight, the route is now considered running at maximum capacity. There was also the same route knowledge issue along this section with TPE crews un-trained. It's a shame as although passengers prefer direct services, the change at Retford for London or Doncaster would be preferable for the change to a coach at Scunthorpe.
Posted by LEYTR

I agree, had this have happened in Surrey or somewhere like that it would be front page news for months.

Hope people are able to find reasonable alternatives for getting to work promptly.

This track is not safe for travellers and I think rail would not be running on this track. Thanks for sharing this post to make people aware of the rail track. compare airport parking