We're a little late in advertising this, even though there's still a month to go, as it's been doing the rounds for a while. That said, as the news reached us a day late to include in the last LEYTR, it is only right and proper that we help promote a special running day in Lincolnshire on Good Friday.

England's oldest independent bus company, Delaine Buses of Bourne, will be running their trio of heritage vehicles in passenger service on 29 March from 0930 to 1630. This is primarily to mark the 40th birthday of their Leyland Atlantean, ACT 540L, which entered service on 1 March 1973. Numbered 72 in the Delaine Buses fleet, the Atlantean (with Northern Counties body) was the highest-capacity double decker in production at the time. 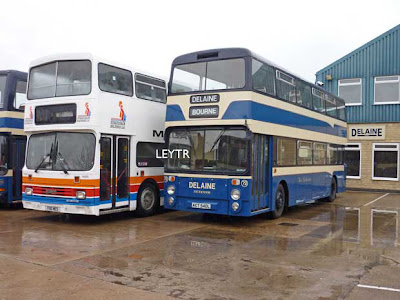 Atlantean 72 is seen here at the Delaine Buses depot last year with another double decker that boasted the highest seating capacity available at the time, Stagecoach East's Megadekka.

A special timetable is in operation on Good Friday, with direct Service 101 journeys the order of the day between Bourne, Market Deeping and Peterborough. Departures are at 0740, 0900 then 00 & 30 until 1700. Return times from Peterborough are at 1000, 1030 then 00 & 30 until 1800. All services call at all stops en route, with Market Deeping being the central timing point 20 mins after leaving each end. End-to-end journey time is 40 minutes. 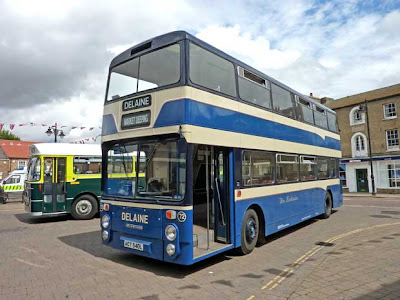 Seen in its 39th year during 2012 is Leyland Atlantean 72 attending the Morley's Running Day, based at Whittlsey Market Place. The bus made a number of shuttle services between Whittlsey and Thorney (following a former Morley's route) and a trip to the Emblings/Judds depot at Guyhirn.

The company's remaining heritage fleet are half-cab double deckers. The oldest is 45 (KTL 780), a Willowbrook-bodied Leyland Titan PD2 new to the company in May 1956. Celebrating its half-century in 2010 (and given pride of place on the LEYTR magazine covers of that year) is the remaining vehicle: 50 (RCT 3), a Yeates-bodied Leyland Titan PD3, which entered service in June 1960. Unusual for this bus is that it has been owned, maintained and licensed as a fully PCV from new with the Company. Titan 45 was sold only to be bought back a number of years later, for preservation. 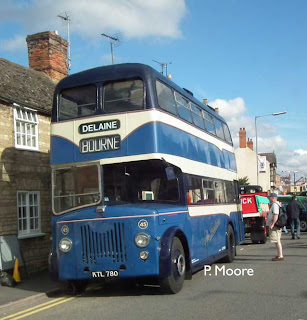 Taken at the BRM Day in Bourne last October (covered in the Nov/Dec 2012 LEYTR) is the Company's oldest vehicle, Titan PD2/Willowbrook 45. New in 1956 the bus is fast approaching its 60th birthday. Photo: Peter Moore.


Titan PD2 45 will be working the 1230 from Bourne and 1330 from Peterborough - a rare outing for this stalwart of yesteryear. The last time it operated in passenger service was on the Company's Leyland Day in 2008. It had been planned to take the bus to the LVVS Rally in Lincoln last November, but heavy rain forced the company to take something newer. 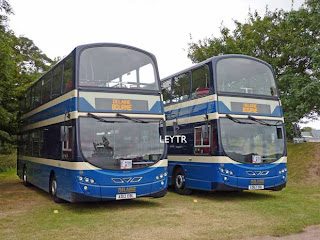 All other journeys on Service 101 will be operated by the Company's fleet of low-floor double deckers, with the trio of Gemini-bodied Volvo B9TLs likely to be in operation. The newest two (152/3 AD12/62 DBL) are seen here at Showbus last year.

The operation of the heritage fleet on the xx30 departures from Bourne & Peterborough will be the actual service vehicles, not reliefs/duplicates. Traditionally, loadings are low on Good Friday in this part of the country, the Company has said, and it is hoped that the running day will generate greater use of the services. Speaking to the LEYTR, Delaine Buses managing director Anthony Delaine-Smith, said that if a success there is no reason why it couldn't be repeated in the future.

A Day Rover ticket costs £5 adult (18+), £4.50 young person (11-17) and £4 child (5-10). A Group Day Rover costing £10.60 is also available, enabling up to 4 people to travel on the same ticket, with a maximum of 2 adults. A full range of single and day return fares will also be available, as the heritage fleet is operating a normal service. Free English national concessionary bus passes will also be accepted for travel.
Posted by LEYTR