I've been watching a new fly-on-the-wall documentary series on Channel 5 called Stansted - The Inside Story. The subject matter is fairly obvious any nothing new. After all, it was easyJet who pioneered this fly-on-the-wall documentary over a decade ago and had many hours of their Airline programme filmed at Stansted as well as neighbouring Luton.

But in the last episode of the season, the cameras followed a PCSO and a police constable who were patrolling the airport perimeter fence, following an alleged breach. In a later scene that featured both officers, a couple of aviation enthusiasts were approached to ask, initially, their purpose of being where they were and (after ascertaining that the couple were legitimately indulging in their hobby) then asked them to keep an eye out for anything suspicious. 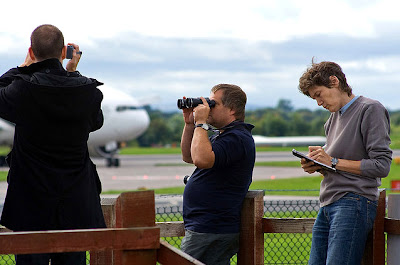 Photo: Colin Bell
The husband of the couple was also asked if he had signed up to the airport's list of aviation enthusiasts. He hadn't, though was a member of one elsewhere and intended to do so. This got me thinking.

So often, bloggers detail very negative experiences when they're legitimately enjoying a perfectly legal past-time on a railway station platform or near a bus station. Usually, jobsworth employees - and in some occasions security personnel - are those who cause the problem, with ignorance of the law and their employer's guidelines on taking photos.

Why doesn't the British Transport Police take a leaf from the aviation industry's book and enlist transport enthusiasts visiting railway stations as additional eyes and ears on the ground? They could issue an ID card to the hobbyist who could show to anyone questioning what they were doing. This could then become recognised by local authorities and PTEs for use by bus photographers in bus stations and interchanges. 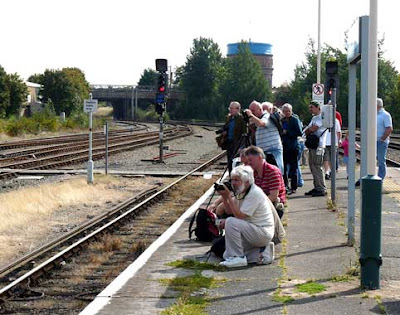 Photo: Chris Middleton
It would be free to sign up to and recognised by the BTP and local authorities in ensuring additional safety in busy public places. Quite often the same group of rail enthusiasts will gather at the same end of the same platform at the same station so, ironically, know the 'lie of the land' better than anyone else - certainly more comprehensively than the BTP - and could be an invaluable asset. That's not to say a transport enthusiast wouldn't ordinarily contact the relevant authority if they saw some suspicious behaviour; I'm sure they would. This scheme would place worth on the enthusiast's hobby and also stop over-zealous officials in their tracks.

So far as I can see the only aspect of the scheme needed to be reinforced is that the holder of the pass is not entitled to any preferential treatment, nor would they be permitted in areas accessed only by railway workers/bus crews. It would need a face-to-face application process to ensure this message is put across as clearly as possible.

I suggest the title of Transport Observer being given to the scheme. How and where you'd apply would need to be ironed out and the length of time each pass lasted before it needed renewing would also need to be discussed. But I think the idea is a winner. I'd sign up for it like a shot.

There's been talk of a similar scheme at the London terminii, I first heard mention of it before Christmas. But not heard anything since, so don't know if it has stalled.
Do think it's a good idea though.