They've been gone from the streets of London for over a month now and in its annual financial results, Arriva London North has shown the extra costs involved in replacing these oft-hated 'wiggly worms' from the Capital. 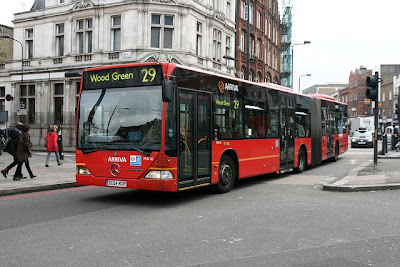 Arriva operates Service 29 (Wood Green-Trafalgar Square) which operated for many years with articulated buses. This route was one of the last to lose its bendy buses in favour of standard double deckers. Photo: H Pulling
Arriva London North operated four high profile routes in London with articulated Mercedes-Benz Citaros, or 'bendy buses' to the uninitiated. Routes 29, 38, 73 & 149 were all converted to rigid standard specification double decker operation in relatively short time of each other and the costs Arriva has to bare in the short term are financially significant.

Of particular note is the increase in administration costs - 31% to £24.1 million - which can be attributed to training staff to drive the new vehicles and to recruit additional staff needed to drive the extra vehicles needed to replace the bendies. This showed an increase of 7% in the labour force: 39 more double deckers are now needed in the peak periods just for Services 38 & 149 in order to move the number of people the bendies managed. An additional 106 buses are operated by Arriva London North now, compared to before their Citaros were removed from service, equating to an increase of almost 60%.

But this is the short term. Arriva would not stomach these additional costs just at the behest of public will in London; rather the whole of London will pay for the losses suffered by the company through additional payments made by Transport for London to the company over the period of time each route contract lasts. By the end of each, Arriva London North is expected to be comfortably running each on similar financial terms to other operators and routes. 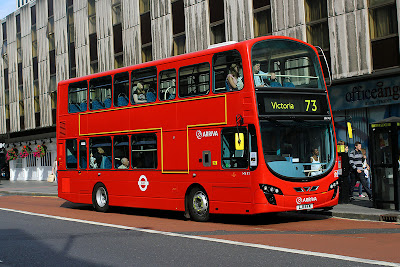 There are more buses needed to operate Service 73 (Victoria-Stoke Newington) today with double deckers than was needed pre-bendy, when the Routemaster plied its trade along the route. The costs associated with the introduction of these extra buses and drivers will be reflected 2011's accounts. Photo: David Heath
Next year's accounts won't be much improved, either, as they will show similar increases in admin and labour as the company's two remaining bendy bus routes were converted (73 & 29), necessitating a nett increase in buses to the tune of 22. Not as drastic as converting the 38 & 149, but any company that increases their operational base to this tune will expect to post decidedly average accounts at best in the short term.

They may have "bared" the costs by opening them up to the public, but I suspect you meant "bear" the costs.