Having recently undertaken 7 hours' of training that forms part of the now mandatory Certificate of Professional Competence qualification for anyone who wishes to be able to drive a PCV from September 2013, the most (dare I say it) useful aspect of the day's work was learning what a Japanese Crossing is. There is only one in the UK.

Anyone with a good understanding of the Highway Code will be familiar with Pelican, Puffin, Toucan and even Pegasus Crossings, but I'd never come across a Japanese Crossing before.

It was opened on 3 November 2009 in central London, at Oxford Circus. Being the first of its kind in the UK, similar crossings are used throughout Tokyo, with the concept aiming to be revolutionary in traffic management (had it been a UK company, they'd have chosen the line: pedestrian-traffic interface solutions or something equally as ghastly).

But what is it? It's so simple that I'm staggered we've only recently cottoned on. At a four-way crossroads, controlled by lights, all traffic temporarily stops and pedestrians are allowed to cross all four roads at the intersection (as now) plus cross diagonally, as the images below show: 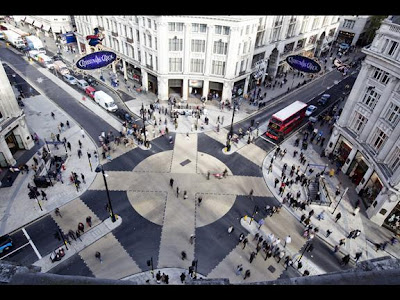 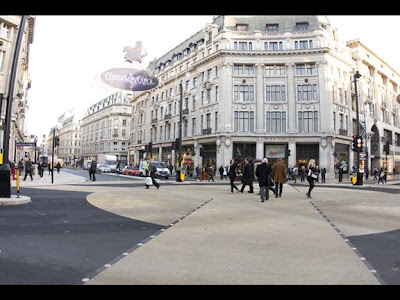 The crossing cost £5 million and forms part of the plan to renovate the local area, with wider pavements and better access to Oxford Circus Tube station. We made use of the crossing while on our 2010 LEYTR Jolly Boys' Outing and noticed a countdown shown on each of the traffic lights to pedestrians know how long they have before a set of lights will turn green for motor vehicles.

British designer Atkins installed the crossing in London and claim that it can now handle double the number of people that used to be able to pass through. In tandem with other improvements to the intersection, 70% more space has been freed up for pedestrians.

It has, however, slowed the traffic flow down. This will have undoubtedly had an impact on journey times for the buses that use the already-congested Oxford and Regent Streets. Now, in every traffic light cycle, all directions of traffic come to a standstill. Previously, both the green figure (can't say 'green man' now) for pedestrians and a green traffic light for motor vehicles could be shown at the same point in the cycle, but this meant pedestrians couldn't get from the south-east corner across to the north-west corner in one go; they'd have to do it in two stages, which meant crowding at the middle point. The Japanese Crossing has eradicated the need for pedestrians to dwell at the expense of traffic flow, but since private motorist are severely outnumbered in this area of London by public transport, the increase in time taken to cross the intersection has not been widely criticised.

It could be argued that the average speed of traffic in the area is so low that the overall increase in the traffic light cycle has very little impact at all on traffic flow and to some extent we see their point. This would seem to suggest that the Japanese Crossing has limited scope for use elsewhere in the UK, except areas of dense pedestrian population and such slow average journey times by motor vehicles that the increase in time taken to cross their intersections will have very little notice.

Devon Country Council has helpfully defined each pedestrian crossing type in use today, though have omitted the Japanese Crossing, presumably because it falls outside their area.

"There is only one in the UK"

Every writer knows that posting that phase will trigger that reply.

Back in 2009, the Oxford Circus diagonal crossing was extensively
discussed on Usenet uk.transport.london and at least two prior example
were mentioned.

I see that http://en.wikipedia.org/wiki/Oxford_Circus has it now

Indeed, subject to definitional argument, the crossroads in the centre of
Walton-on-Thames has one or at any rate an "all green for pedestrians"
phase so a diagonal crossing is safe even no diagonal crosswalk is
marked on the road surface. (intersection of High, Church, Bridge streets
with Hepworth Way).
Posted by LEYTR

I am not at all sure why it is called a Japanese crossing as they are in use in Perth, Western Australia. I was taken across one about 12 years ago by my sister who lived there as a return "treat" for taking her round the Magic Roundabout in Hemel Hempstead!

These crossings are often called Barnes Dance crossings - Google the term for details.