There have literally been dozens of different Tube Map designs over the years. The work of Harry Beck has yet to be beaten though. Occasionally, those cartographers who understand that perfection cannot be improved upon, choose to modify the names of the stations instead of a total reinvention. I remember one map produced that rearranged the letters in each and every station name - some of the results providing much mirth!

The latest to be modified in this manner shows the location of movies that have been shot either at or in the vicinity of each Tube station, with each station name being altered to reflect this. It has been produced jointly by Transport for London, Film London and the BMI London Film Festival. Where locations have had no films made, British TV programme names have been used. 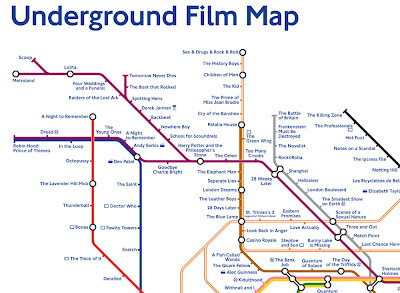 Click to enlarge
Unlike the other versions produced by die-hard Tube fans, this one - with it's 'official' production credentials, has a price tag. The TfL online shop is currently selling 100cm x 70cm posters at £9.95. Its production coincides with the BFI London Film Festival, which runs between 13-28 October. An interesting fact is that on average, each day 35 film and TV crews use London as a location to film in.