Contributing writer GBW looks at how Facebook is being fine-tuned by one bus company.

Said Anton Rippon, journalist supplying material to the Derby Telegraph, last month: "This week, I was going to write about Trent Barton’s customer services phone line. But that will have to wait. Instead, I want to tell you that the same bus company has banned me. Not from its buses (at least I think not) but from writing on its Facebook page. The company’s commercial director, Alex Hornby, has told me that I’m “disruptive”.

Quite what Rippon's disruptive behaviour was will have been removed by now, though perhaps Trent Barton's online lurkers weren't aware of his credentials when choosing to ban him from commenting on their Facebook site. Love or loath journalists, trying to clip their wings when they've been undertaking in a perfectly legal past-time is sure to set them off.

Understandably, had both individuals been on Trent Barton's payroll, they'd be facing a potential charge of gross misconduct in addition to having their right to respond revoked. But they're not. They're both potential customers and for a market leader like Trent Barton to alienate potential custom from opinionated locals - both of whom have used their services in the past - seems very odd. Journo Rippon was told that his comments were, "causing conflict among fans which is something we are not willing to promote".

You'd be forgiven for thinking that the world is a little less free than when you started reading this entry. Perhaps not. While Trent Barton's Facebook page looks like it could have been started by a group of like-minded enthusiasts, it hasn't. It is a Trent Barton production, formed and administered by them. Anyone can start a Facebook profile up, call themselves whatever bus company they like and invite people to join and comment. Trent Barton's is effectively an arm of their business and is being monitored quite heavily it would appear (certainly if a commercial director is entering into direct communication with people no longer allowed to contribute). 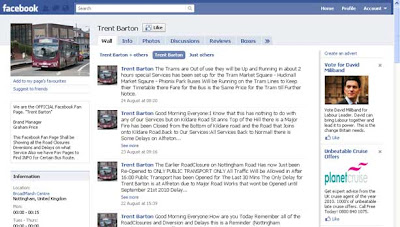 Facebook undoubtedly brings Trent Barton closer to its public and offers its passengers as much information as they can possibly get in this medium, from a bus operator. The down side is that Trent Barton alone judges what it considers to be truly free speech, similar to how it would with comments left on its website. Some will argue that *all* free speech is acceptable and that nothing should be removed from the www unless it becomes criminally sensitive. A company with an image to upkeep will obviously think otherwise.

I would imagine there are plenty of anti-Trent Barton forums out there, if you're willing to look hard enough. (GWB)

As it happened, two Trent Barton drivers, who clearly identified themselves as such, also posted on this particular Facebook site, in favour of Rippon's (and others') point of view. But their comments were quickly removed. I wonder what happened to the drivers!

Regarding your comment on the 'Trent Barton' Facebook page you discuss here. This page has in fact been set up but an enthusiast. TrentBarton itself doesn't have a Facebook page it has set up a separate page for each 'brand'.

Nottingham City Transports Facebook page is a model of how things should be done, people are allowed to complain and then people are swiftly directed on how to follow the matter up (by emailing them) and the posts are allowed to remain.

Good for Nottingham City Transport. Banning people is always a bad move. If it had all been allowed to remain, only about 250 people would have ever been aware of the points of view. Now (counting the newspaper readers and goodness knows how many people on line) it's been opened up to tens of thousands of people.
Own goal, I'm afraid.

Liam, I've seen the page concerned - it is, in fact, the Facebook page for The Mickleover which has been started by and is run by the company itself.

I saw Mr Rippon's comments before they were taken down. There was nothing offensive, nothing personal and nothing inflamatory. Only disatisfaction and an attempt to have a discussion about the company's proposal to remove the service from the city's bus station. And Mr Rippon only made a handful comments and questions - less than 5 I would estimate. There were other people with more contributions but they have not, so far, been banned. Why Mr Rippon has been singled out we can only guess. But if it had something to do with his profession, it certainly backfired!
Amusingly the same page claims to have asked for opinion from bus users on that service but, while there are a number of not entirely supportive comments remaining, only those in full support of the company and its decisions are guaranteed to remain intact. Trent Barton's message is clear: don't bother expressing an opinion unless it agrees with ours!

Actually Liam, the Facebook page from which critics have been banned HAS been set up and IS run by Trent Barton. It's not something run by an enthusiast as you said.
That's how Trent Barton has been able to remove criticism tat has come from passengers and from its own drivers.
As the other Anonymous said, it was a massive own goal and got the company much more adverse publicity than if it had just left things as they were and took it on the chin.
I saw all the postings before they were deleted and none were rude or offensive. They just called into question the decision and the process by which it was arrived at.
Of course, they've all disappeared now and Trent Barton can claim what they like about them.

Sorry, I do apologise, I meant the picture in which has been posted in the blog and the paragraph above it. I'm well aware of the controversy around the Mickleover page