From the Editor's sickbed.

Recovering from a bout of gastric flu has meant there's been plenty of news to be watched and read about and the biggest story during my incapacity thus far has been that of an overturned coach on the M40, which took place in the early hours of Sunday morning.

The coach was none other than one operating the flagship Oxford Tube service, owned by Stagecoach. A 21-year old man seemingly wrestled the driver for the steering wheel while the double-deck Van Hool Astromega coach was travelling eastbound along the M40 at a fair old lick, between Loudwater and Beaconsfield. 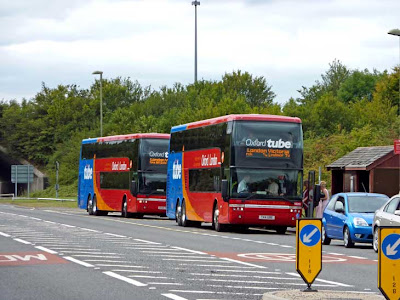 Lewknor Turn, M40 J6, two London-bound Van Hool Astromegas can be seen loading passengers
While this is the third coach to overturn in 3 years and 8 months, this should not be lumbered in the same category as the others: on this occasion, driver error has been ruled out with only one person being arrested and charged with criminal damage and assault, bailed, and due to return to court at the end of September.

It sounds like a cop out to some, but there's very little any operator can do to prevent this specific situation from re-occurring. It might sound shocking, but it is regrettably true. Fitting assault screens to buses operating urban routes is now the norm in most cities and while this could prevention a passenger making a grab for the wheel, it would not guarantee it. It may be something Stagecoach will consider, but the aesthetics of modern coach interiors do not lend themselves to the retrospective fitment of assault screens, with a virtual cocoon needing to be built, in which to house the driver.

So rare are these occurrences, that we both expect Stagecoach to ensure justice is done and then continue to operate its award-winning service in the same manner as ever. Should assault screens be fitted to the Astromegas, one could argue drivers of its Megabus coaches could be justified to ask for the same level of protection: they, after all, also travel at the same high speeds and operate some routes using double-deck Neoplan Skyliners. 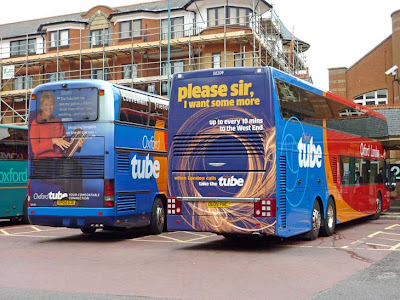 The Astromegas replaced ageing Neoplan Skyliners (left); newer examples of the latter operate on Stagecoach's Megabus inter-city coach network and do not have additional driver protection
Taking the controls of other modes of transport is not as straightforward as buses and coaches. It is now nigh on impossible for anyone to overcome the captain and first officers of passenger aircraft. Indeed, it is accepted that those in the cabin should face whatever the terrorists on board have to throw at them while those in the cockpit make for an emergency landing. While this ensures another 9/11 will never occur, it does leave ordinary passengers and crew somewhat helpless.

The door to the driver's cab in trains would need more than a swift kick to gain entry. Besides which, the manner in which trains operate would see braking commence as soon as the driver released his 'dead man' device. The Astromega coaches used on the Oxford Tube do not have cruise control, so you could argue that the driver has a similar option here, to take his foot off the accelerator. This doesn't automatically mean the brakes will be applied and in the instance on Sunday morning, the steering wheel was what caused the overturn to occur. Excessive braking might have made things even worse. 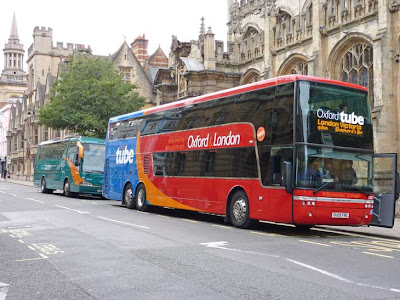 Seen loading outside Queen's College in Oxford are two operators jostling for patronage and between them have grown the market impressively. Although the Astromegas are only a fraction taller than one of City of Oxford's single-deck Irizar Centuries, passengers will undoubtebly feel safer on a vehicle that has 'no upstairs'
The absolute worst possible outcome is the short-term decline of coach ridership between Oxford and London. We expect City of Oxford's single-deck coaches operating a near-identical route to see a slight upsurge in patronage, as passengers associate a single-deck coach with greater stability. Similar to the immediate aftermath of the 7 July 2005 bombings in London, Transport for London recorded significant growth in its bus usage as people chose not to travel beneath the surface. This has long since levelled out. We can't think of any reason why it shouldn't if a negative effect is felt on 'Oxford's Tube'.