An image of Lockington

At 1000hrs on 26 July 1986 a Ford Escort van was in collision with the 0933 Bridlington-Hull four-car Class 105 DMU, that resulted in East Yorkshire's worst-ever rail disaster. Travelling at 50mph the train collided with the van that resulted in a derailment at relative high speed. Passengers were thrown through the windows of the train and in total 9 died. 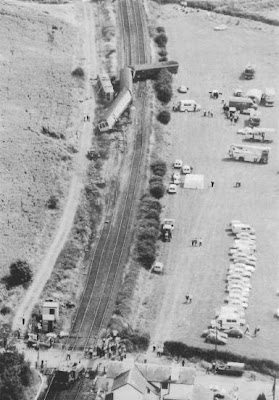 The '105' was heading north in this image, having collided with the van at the level crossing at the very bottom of the photo. The leading car lays completely on its side with the second partially in an adjacent field
We feature a special event that took place 24 years to the day in the forthcoming LEYTR (that will be posted at the weekend). The report into the crash makes interesting reading and we've linked to it below.