In just over a year's time, the UK's newest stretch of double-track railway will open and be controlled using Victorian signalling rules.

The stretch of line runs between Oxford and Worcester, known as the North Cotswold Line and the reason why the 'absolute block' signalling rules have had to be applied is due to problems Network Rail (NR) have encountered when attempting to move the signalling responsibilities for the line to the new Didcot-based Thames Valley Control Centre.

The line is being upgraded from its single-track formation to double-track, between Evesham and Charlbury. Despite absolute block being applied throughout the section, the equally Victorian semaphore signals will not. 'Modern' colour light signals will be the order of the day except at Moreton-in-Marsh, which will retain its semaphores. 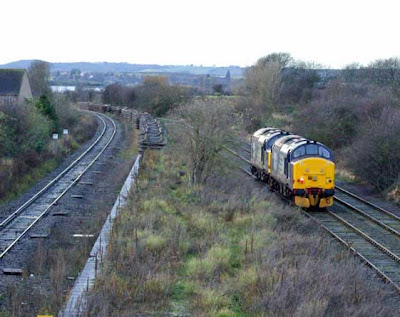 Two Class 37s working for DRS are seen approaching Honeybourne from Long Marsden. To the left is the North Cotswold Line that is clearly single-tracked. Over the next year this section of line will be doubled, increasing the number of paths available to all types of train service
Photo: Jonathan Giles
Although the double-track section is due to open in August 2011, NR has yet to appoint a contractor to undertake the work, which will commence with the clearing of the line in order to make sufficient room for its horizontal sprawl. The scheme, totalling £70 million, will provide better capacity along the route used by many First Great Western passenger services, as well as enable an increase in freight traffic - the line being well situated for access to/from the Long Marsden storage depot.

LEYTR Comment: The Victorian semaphore signalling system being used is more a red herring than a headline here, if we're honest. Absolute block has, ironically, enabled NR to keep its costs down (though it would have loved to be installing the latest state-of-the-art signalling system). £70 million actually buys a lot here - 21 miles of completely new double-track; the trackbed being extensively cleared and cut back; upgrading the signalling like-for-like; replacing bridges, improving stations and remodelling Honeybourne - a move designed to improve access to/from Long Marsden and to also afford the preserved Gloucester Warwickshire Railway a route to the station without needing to alter the track layout.

And all of this within a year. The track-laying contractor is expected to be awarded in the next month, with work commencing in August. Signalling equipment is scheduled to be completely overhauled and completed by October. Work in total has been equated to 20 weeks and, even better, is that most work will take place through the night, with the need for replacement bus services kept to an absolute minimum. While the benefit to passengers through improved journey times is negligible (1-3 minutes in general) it does broaden the scope for additional paths for both passenger and freight trains. Many people quite rightly believe NR needs a shake-up in order to increase its efficiency; here, however, the nationalised infraco seems to genuinely be pulling its socks up.